Goodbye to my Broadway Billy 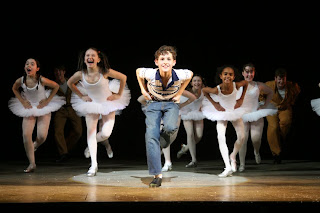 Today is 15-year-old Trent Kowalik's final performance in Billy Elliot on Broadway and it's something of a milestone.
Trent was in the London cast and the Long Island native came to New York when the musical opened in 2008. He's the last of the three original, Tony-winning Broadway Billys still with the show and most importantly, he's the one I saw in the role.
What's stayed with me the most about Trent is, no surprise, his terrific dancing. Watching him tapping and leaping and pirouetting across the stage I remember thinking, "I hope he stays in musical theatre because I'd love to see him perform as an adult."
And as this video shows in addition to being incredibly talented, he's also a well-spoken, considerate young man. I wish him and his fellow Tony winners David Alvarez and Kiril Kulish all the best. I wish I could have seen them all.
As for Billy Elliot, the story of a motherless boy in a coal-mining town in Margaret Thatcher's England has become quite the worldwide juggernaut.
The musical opens this month in Chicago and the 2010 U.S. tour kicks off Nov. 2 at the Durham Performing Arts Center in North Carolina. An Australian run wrapped up last year. Productions are planned in South Korea, Japan, Germany and the Netherlands.
I loved the 2000 movie Billy Elliot and a great deal of the poignancy has been transferred to the stage. It's a bittersweet story about a boy discovering his passion in life and the rocky relationship with his father. It's also about a community under great stress coming together.
But as I said in my review, what truly stood out for me was Peter Darling's Tony-winning choreography. Billy Elliot the musical is a tribute to the joy of movement, to the artistry and exuberance and sheer athleticism of dance.
Posted by Esther at 1:00 AM

I saw Billy Elliot a year ago on Broadway and I absolutely LOVED it. It's one show I can say that I am looking forward to seeing again when it comes to Providence. I saw it with Kiril Kulish and he was fantastic. A truly great show.

We should know in another month what's on PPAC's schedule for 2010-2011 so I'll keep my fingers crossed. I would definitely see it again! I wish I could have seen the other two Billys. From what I've read, they all have different strengths as dancers and the musical was tailored a bit to them. Kiril had more of a ballet background, I think. I have some friends who saw him and thought he was great. Trent is a champion Irish step dancer. But they're all so talented.

I saw Trent's final performance and it was an unforgettable experience. Beyond the heightened emotions and electric audience he never once broke character, even though doing so would have certainly been easy on his part. He remained the perfect professional throughout.

Thanks so much for the comment, Austin! How exciting that you were there for Trent's last performance in the show. It must have been so emotional. I agree, he's a talented young man. Hope I get a chance to see him onstage again.