Barack and the butter cow lady 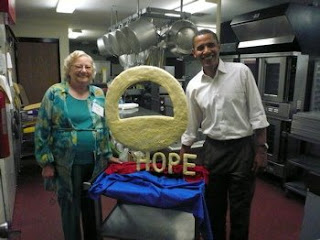 Am I the only one who still feels a bit in shock three days after the election? Just reading the words "President-elect Barack Obama" gives me a chill and has me grinning from ear to ear. And what about the Bradley effect? Didn't that turn out to be the biggest pile of nothing since Y2K had us all petrified that our computers would stop working on Jan. 1, 2000?

But in the midst of all the excitement, all the punditry over what made his historic win possible, I want to give a shoutout to my friend Doug Lyon's mom, whose pivotal support in Iowa last fall was one of the things that helped set the first-term Illinois Democrat - a tall, skinny black man with a funny name and big ears - on the road to becoming our 44th president.

I thought Obama's speech at the 2004 Democratic National Convention was electrifying, and I was so impressed with him after reading his forthright and poignant memoir, Dreams from My Father. But as someone with a deep interest in the history of race in this country, I felt that the odds were against a black man being elected president of the United States. While we've come a long way, I thought that there was still too much dividing white and black America.

Then something happened that gave me pause, opened my mind up to the possibility of Barack Obama being elected president.

In October, Doug's parents, well-known Iowa dairy farmers Joe and Norma "Duffy" Lyon, endorsed Obama for the Democratic presidential nomination. Duffy, famous for her butter cow sculptures at the Iowa State Fair, recorded a radio ad voicing her support and later made a bust of Obama in butter. The campaign spent some time with the Lyons at their farm in Toledo, in Tama County, and shot this video.

If you watch the video and listen to the radio ad, you'll realize that the fact that Obama was black and had a funny sounding name didn't seem to bother Joe and Duffy Lyon at all. They sound very comfortable expressing their support. And I like to think that in them, Obama saw something of his own Kansas born and bred grandparents, Madelyn and Stanley Dunham.

The Lyons talked about what was at stake in the presidential campaign, about their fears and their hopes for their state and their country. Joe said Obama reminded him of John F. Kennedy and Duffy talked about his plan for rural America and the need to provide opportunities to young people so they don't have to leave Iowa to follow their dreams.

When Obama won the Iowa caucuses in January, it was seen as a turning point in his campaign, a sign that he had widespread appeal as a presidential candidate if he could win in the heartland, in a state with a tiny African-American population. Obama went on to win Iowa on Tuesday, and he carried Tama County.

Doug is modest about this, but I honestly believe that his mother's endorsement helped Obama win the Iowa caucuses and put him on the path to victory as the nation's first African-American president. As one writer put it, the Lyons' backing gave him some "tractor cred."

I wrote in August that the Lyons' were my favorite Obama supporters, and not just because their son has become a dear friend, a man who has been so incredibly generous and sweet and welcoming to me in the short time we've known each other.

They're my favorite Obama supporters for one simple reason: They remind me that it's possible in this country to break down barriers and effect change. All it takes is a big heart, an open mind and enough common sense to realize that what unites us as Americans is much more important than what divides us.

So Duffy and Joe, I hope you're savoring this moment and the role you played in making history.
Posted by Esther at 12:35 AM

what a fun and QUIRKY little connection. so cool.

I know, it is cool. It's one of those things that makes you hopeful about America.