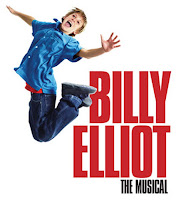 A week after seeing the musical Billy Elliot at Broadway's Imperial Theatre what I remember most - even more than Elton John's songs - is the dancing. In the hands of choreographer Peter Darling, this is a show about the absolute joy of movement, about the artistry and exuberance and sheer athleticism of dance.

The night I saw Billy Elliot, Trent Kowalik played the title role - a motherless miner's son from northern England who discovers that he has a passion and talent for ballet. Kowalik, 13, is a world-champion Irish step dancer from Long Island, N.Y., who previously performed the role in London's West End. On Broadway, he rotates Billy with Kiril Kulish and David Alvarez. I wish I could see all three of them.

I saw the 2000 movie Billy Elliot when it first came out and it's one of those small British gems that I really enjoy. Usually, they're about a depressed northern city or gritty London neighborhood and involve a community coming together to surmount some obstacle.

Unlike some of the more recent movie-to-musical adaptations I've seen, a lot of the charm has survived. The musical, which opened in London in 2005, features some of the same creative team as the movie - Stephen Daldry directed both and book writer and lyricist Lee Hall also wrote the screenplay. (And don't worry about the accents or not knowing the history. Everyone's easy to understand and there's a page in the Playbill that'll give you a brief rundown of the events covered in the musical.)

The story takes place against the backdrop of a strike by coal miners that lasted from 1984 to 1985. The miners walked out to protest efforts by Prime Minister Margaret Thatcher to crush their union and close unprofitable mines. There's a very pointed political song, "Merry Christmas Maggie Thatcher," and a rousing ensemble number, "The Stars Look Down," that bring home the anger of the miners. (And I also liked Ian MacNeil's whimsical set that rises up from the middle of the stage.)

As Billy's dad, Gregory Jbara is wonderful. He's a hardened, gruff man who can't imagine a life for his son that doesn't involve learning to box and going to work in the mines someday. Carole Shelley is funny as Billy's slightly forgetful grandmother and Santino Fontana is forceful as Tony, the brother who doesn't want to give in and go back to work.

It's pretty amazing to watch Billy's transformation as a dancer, from his first awkward steps to true grace. Kowalik is really terrific - a miniature Gene Kelly leaping and tapping and pirouetting across the stage in his "Angry Dance" and "Electricity." I hope he sticks with musical theatre, because I'm looking forward to seeing him on stage again as an adult.

I loved watching him surrounded by tutu-clad little girls in "Shine," and the big scrum of girls, miners and police officers all on stage together in "Solidarity." It looked a bit chaotic - I was amazed no one got a ballet-slipper-clad foot stepped on - but you just know there's an incredible order to it. There's also a sweet, funny duet, "Expressing Yourself," with Billy and his friend Michael, played by Frank Dolce at the performance I attended.

Like Billy, his dad also undergoes a transformation. It's so moving to watch him come around, from open disdain to the point where he's proud of Billy's skill as a dancer. There's a poignant scene near the end when he reaches out to hug his son and Billy turns away, perhaps without even thinking.

But to me, the person who comes closest to stealing the show is Haydn Gwynne as Billy's dance teacher, Mrs. Wilkinson. Gwynne originated the role in London, and she is so hilarious and unforgettable. I thought the show lost a bit of its spark during Act II, when she was largely absent. She portrays Mrs. Wilkinson as a demanding teacher, exasperated by her young charges' apparent lack of coordination. When she discovers Billy's talent, she rises to the occasion and becomes his champion.

I'll admit that Billy Elliot played with my emotions. The one scene that had me in tears during my week of theatergoing was when Billy reads a letter from his dead mother. I don't think there's anything more wrenching than the story of a motherless child.

I had a few quibbles with Billy Elliot. First, while it's very entertaining, at 3 hours it seemed just a tad long. A couple of the dance sequences didn't really further the story. And as much as I loved Kowalik's dancing, I didn't think he was quite as good as an actor. He's a very sweet, appealing young performer but I just felt that the rest of the cast outshined him a bit - except when he's dancing, of course.

One other thing that disappointed me a little - while it's been years since I've seen the movie, I do remember how it ends - the adult Billy dancing in Matthew Bourne's Swan Lake as his proud father looks on. The musical doesn't end the same way and I missed that emotional release.

But perhaps to compensate, the musical has a dream sequence. Billy and an adult, portrayed by former New York City Ballet member Stephen Hanna, dance together. Supported by the strong and muscular adult version of himself, at one point young Billy flies through the air. It's a stunning moment and my jaw literally dropped. It's the moment when you see the man that this boy will someday become.
Posted by Esther at 10:56 PM

It sounds pretty worthwhile and I liked your honest review. The film I found incredibly sweet, sad and funny and I wondered how it would translate. A friend at work whose brother lives in London raved about it when it opened there.

It is worthwhile, even though I fell just short of totally falling in love with it. But the dancing is amazing, it's a poignant story and Haydn Gwynne is awesome - she just creates such a memorable character.