I've been describing Dividing the Estate as kind of a cross between Dallas and Arrested Development - for its quirky characters and story of a multigenerational Southern family. But the family at the center of this funny and oh so true to life play by Horton Foote operates in a world all its own. After all, as Tolstoy might have said, every dysfunctional family is dysfunctional in its own way. 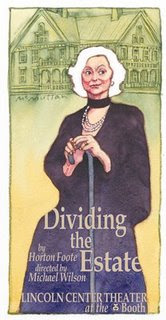 At first, I was afraid Dividing the Estate, at the Booth Theatre, was going to trade in stereotypes - decaying Southern gentry with the dissolute son and loyal African-American servants. But Foote has imbued his characters with so much humanity and made them so unique. The ensemble cast, under Michael Wilson's direction, is wonderful. For my money, it's an immensely entertaining, enjoyable couple of hours at the theatre.
You may not connect with the name Horton Foote, but you probably know the 92-year-old writer's work. He won an Academy Award in 1962 for the screenplay for To Kill a Mockingbird and another Oscar for the screenplay of the 1983 Robert Duvall film Tender Mercies. I first heard of Foote when I saw the 1985 movie adaptation of his play The Trip to Bountiful.

Like some of Foote's other works, Dividing the Estate is set in the fictional town of Harrison, Texas, where an affluent family is settling down to Sunday dinner. And the scenic design by Jeff Cowie accentuates the good breeding - the dining room and living room are comfortable and tastefully decorated. They may be growing cash poor, but they're house and land rich.

As the strong-willed matriarch Stella, Elizabeth Ashley is a bit forgetful but not as out of it as her family would think. She steadfastly refusing to divide up and sell the estate so that her children can have their inheritance sooner rather than later. (And prevent the tax collector from taking a big chunk, as her son-in-law helpfully points out). She doesn't much care for oil or gas drilling leases either.

Her three children are the n'er-do-well Lewis (Gerald McRaney), the genteel widow Lucille (Penny Fuller) and the acerbic Mary Jo (Hallie Foote), who's decamped to Houston with her husband Bob (James DeMarse) and two daughters. Lucille's only child, Son, (Devon Abner) is the levelheaded one, put in charge of the family's finances and responsible for doling out loans to his aunt and uncle. Arthur French turns in a terrific performance as Doug, the ancient servant the family can't quite convince to retire.

There doesn't seem to be a lot of love lost among these siblings and they have a whopping sense of entitlement. As the play goes on, family secrets are revealed and everyone gets more and more desperate, squabbling over who's getting what, who's more deserving. The economy's in poor shape. The characters are in various stages of scandal and/or crises that require generous applications of cash. Sure, this family may be better off than most, but their problems ring true.

Among the cast, Hallie Foote, daughter of the playwright, truly stands out. (She's also the wife of Devon Abner, who plays her nephew). Foote is absolutely thrilling to watch - hilarious, sharp-tongued, covetous - and I'd never heard of her before. While I'm always eager to see a familiar actor from tv or the movies on Broadway, there's nothing like the joy of discovery.
Posted by Esther at 12:04 AM

You say nothing of GERALD MCRANEY's superb performance.
I am disappointed. I thought he was a stand out.

Hi Lisa,
Thanks for the comment. You're absolutely right about Gerald McRaney. I thought he was superb, too. I was just trying to avoid giving away too much of his plot line.

He does a great job with a character who could be a total drunken layabout. He makes him thoughtful and understated and very human in showing how he chafes at constantly having to ask his nephew for money. At the same time, he's very funny. And the scene where he brings his girlfriend home is priceless.

Esther, Your review really makes me want to see the show. I've now had the opportunity to see Hallie Foote in two other productions (both her father's works) and think she's one of our most unsung actresses.

Thanks, Steve. I definitely agree with you about Hallie Foote. I'd love to see her in something else. I even went to her imdb.com page to see if I could catch up with some of her movie or tv work. I went in knowing a little about some of the other cast members, like Gerald McRaney and Elizabeth Ashley, but she was completely unknown to me, except that I knew she was Horton Foote's daughter. And that made the joy of discovery all the more thrilling.