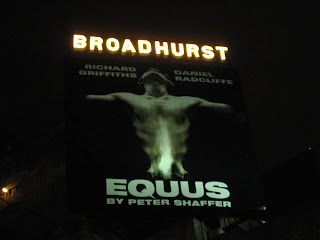 Gratuitous Violins rating: **1/2 out of ****
I've never been all that enthralled with Daniel Radcliffe in the Harry Potter movies. But now that the boy wizard is all grown up and tackling a big, adult stage role - wow, what difference. Seeing Radcliffe make his Broadway debut in the revival of Peter Shaffer's Equus, at the Broadhurst Theatre, really gives me a new respect for him as an actor.

Radcliffe plays Alan Strang, a British teenager who inexplicably blinds six horses at the stable where he works and winds up in a psychiatric hospital. Richard Griffiths (Uncle Vernon to you Harry Potter fans) is Martin Dysart, the psychiatrist who tries to get at the reason why Strang did something so horrible, and to help him.

I really enjoyed Radcliffe's performance as a troubled boy, the way he reveals more and more about himself as Dysart peels away the layers of this mystery. At first, he's barely communicative, speaking in television jingles or giving short, clipped answers to questions. Dysart learns from the nurse at the hospital that Strang is plagued by nightmares, and it's clear he's in great pain.

In John Napier's scenic design, audience members sit above the stage in a semicircle - almost like they're overlooking an operating room - or for some reason, I thought of an ancient amphitheater. And the horses - actors wearing these oversized aluminum heads and hooves - are striking, especially Lorenzo Pisoni as Nugget, the horse to which Strang has an erotic attachment, and takes on secret nighttime rides.
I'd never thought of Radcliffe as very expressive performer but I was really struck by the way he moves in Equus - leaping on the back of a horse, trembling under a blanket after all of his defenses have been stripped away. He's a slight person and he makes Strang seem like kind of a loner - a quiet boy, not very social, not an intellectual, not someone you'd notice if you passed him on the street. It's probably not a coincidence that his name is close to "strange."

Griffiths was ok, but he didn't totally engage me as Dysart. I didn't find him all that compelling as a character. Maybe the problem is the play itself. A great deal of his dialog is a soliloquy in which he envies Strang's passion and bemoans the fact that he doesn't have anything remotely like it in his own life. While he's an academic who studies his obsessions from a safe distance, Strang has immersed himself in them. He'd love to feel something as deeply as Strang does.

Religious faith and overly strict parenting also seem to take a hit in Equus. Strang's mother has imbued her son with a deep faith - something his father disdains, along with television. When his father tears down a drawing of the crucifixion hanging in the boy's room, Strang replaces it with a photograph of a horse - and transfers his worship in a way that's well, disturbing to say the least.

It's almost as if Shaffer is saying, keep the kid from watching telly and fill his head with Bible stories and this is what you'll get. And that doesn't seem quite fair - either to religion or parents. Deep religious faith doesn't necessarily lead to the kind of obsessive devotion that Strang displays.
I was kind of disappointed in some of the supporting cast, too, especially Carolyn McCormick and T. Ryder Smith as Strang's parents. Neither one really came to life for me in any great way and McCormick especially seems to have one overwrought tone throughout the whole play.

But Anna Camp was terrific as Jill Mason, the more worldly girl who gets Strang a part-time job at the stable where she works, and lures him into a sexual situation. She's the opposite of Strang - talkative and perky and quite effective in the role. I don't think she means to hurt Strang but she's clearly leading him into something that he's not ready to handle.

There's been a lot of talk about their nude scene, which comes near the end of the play. (Ok, all of the talk has been about Radcliffe and to answer the question on the minds of his fans - he wears boxers.) I thought it was very tastefully done and both young actors handle it well.

Dysart agonizes over whether he'll destroy the boy's passion if he cures him. I think it's an interesting question, this intersection of madness and passion and what do you take away when you restore sanity. Do you somehow diminish the creative process? But I can't really believe that Dysart could envy Strang. His passion leads to violence. Next time, he could hurt himself or someone else. And that's nothing to envy - or romanticize.

GV, I've just now read your review after postdating my own (see September 30). Interesting how closely we see eye to eye on this one!