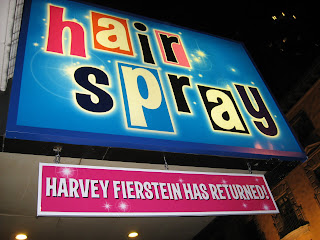 Gratuitous Violins rating: **** out of ****
For months I've just assumed that Spring Awakening would be my first experience seeing the same show on Broadway and on tour. I've even mentioned in my blog a couple of times how I was looking forward to comparing the two productions when the national tour comes my way next year.

The producers of Hairspray announced that the show would end its Broadway run Jan. 4 after 6 1/2 years. Harvey Fierstein anounced that he would return to reprise his Tony-winning role as Baltimore housewife Edna Turnblad for the final two months. And that event just happened to coincide with my already-planned weeklong trip to New York City.

So in a bit of perfect timing that usually doesn't occur in my life, Hairspray, one of my favorite musicals, becomes the first show I can say that I've seen on Broadway and on tour. And I got to see it with one of its original Tony-winning cast members.

(It was also announced this week that Tony winner Marissa Jarret Winokur, the original Tracy Turnblad, is coming back Dec. 9 for the final month of the run but sadly, I'll miss seeing her.)

Let's get the most important thing out of the way - I loved it in both places. Granted, I saw the tour more than a year ago, so I can't compare them in great detail. I don't remember whether the sets or choreography were different on tour or whether they cut or rearranged things. And I didn't see the show on Broadway with its original cast, like I did with Spring Awakening.

But no matter where you see it, Hairspray still has the same energy, the same humor, the same terrific, catchy pop score by Marc Shaiman and Scott Wittman and the same inspiring story. What really came through this time though - even more than the story - was the buoyancy of the music and the energy of Jerry Mitchell's choreography.

I don't know whether this makes sense, but sitting in the orchestra at the Neil Simon Theatre, I could practically feel the music. This is a fun, joyous and moving show. I've enjoyed every version of Hairspray - John Waters' 1988 movie, the musical and the 2007 movie of the musical, but I have to say that the stage version is my favorite.

And I've loved every Tracy Turnblad, too, including Marissa Perry on Broadway. She's so eager and sweet and sincere as the plus-sized teen who dreams of dancing on The Corny Collins Show. She also doesn't see any reason why black kids and white kids can't dance together on television. After all, it's 1962 and there's a New Frontier.

I really enjoyed the rest of the cast, and I think part of the reason is that the characters are so memorable. Constantine Rousouli does a great job as teen heartthrob Link Larkin. Tevin Campbell is wonderful as Seaweed, the black kid who teaches Tracy a whole new set of dance moves and introduces her to a new side of town. He has great chemistry with Tracy's friend Penny, played by Niki Scalera. And Kate Loprest has down the whole spoiled rich girl thing as Amber von Tussle. Gretchen Bieber was perfect as her snooty, conniving mother, Velma.
The only question is: How big a difference is seeing Hairspray with Harvey?

Well for me, it kicks everything up a notch and makes the show even more hilarious. He has so much energy and he's such a great comic actor - the way he raises his eyes or scrunches up his mouth or jumps up on the hot dog cart in "Welcome to the Sixties." I loved his duet with Ken Marks as Wilbur Turnblad in "You're Timeless to Me." All I can say is - John Travolta? Puhleeeze. No one holds a candle to Harvey in this role.

I had a chance to meet Scott Wittman, one half of the composing team, in May, and I told him how much I loved Hairspray. We were standing at the stage door after A Catered Affair and he was waiting for Harvey to finish signing autographs. He pointed to Harvey said that he was a big part of the show's success. Now, I see his point, although I still think the show is strong enough to stand on its own, even without Tony winners in the cast.

Of course, I didn't have quite the same reaction as I did the first time I saw Hairspray. Back then, it was the excitement of discovering something new. Here, it was like spending an evening with an old friend - I was so excited waiting for my favorite songs and scenes and lines.

I wrote a couple weeks ago that when I first saw Hairspray, I was reduced to tears hearing Motormouth Maybelle, the African-American record shop owner, sing "I Know Where I've Been." The song truly evoked the great civil-rights anthems of the 1960s. I expected to have the same reaction a second time, but while Charlotte Crossley's rendition was powerful, it didn't evoke the same reaction.

When I saw Hairspray on tour 18 months ago, I thought more about the the way things were, about the long struggle to overcome racial segregation in this country. The musical tells such an inspiring, important story in a very entertaining way - it's about standing up for what you believe in, no matter what the cost. It's about how, sometimes, the most unlikely people can be heroes - and get to dance on television.

This time, maybe because I was still on a post-election high, I felt differently about Hairspray. I reveled in the fact that we had overcome. I was grinning pretty much throughout the entire show, and I felt proud.
Posted by Esther at 9:17 AM

I'm glad you got to see Harvey. I really enjoyed the original film and the touring production of the musical I saw. When the new film version came out, with the exception of Nikki Blonsky and a couple of the other kids, all of the 'names' in the cast let me down hard.

Harvey's wonderful and I used a Playbill discount code for my ticket. Truly one of the best bargains on Broadway! I liked the new movie but you can't match the immediacy and energy of the stage version.