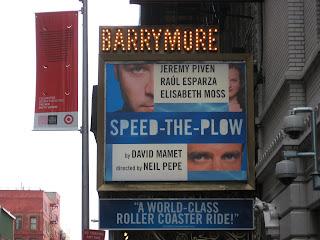 Gratuitous Violins rating: ** 1/2 out of ****
I've seen a couple of David Mamet's movies and I've watched the 1992 film of his play Glengarry Glen Ross but I wasn't quite prepared for hearing Mamet's staccato dialog spoken onstage at Broadway's Barrymore Theatre in Speed-the-Plow.

The opening banter between Hollywood producers Bobby Gould (Jeremy Piven, from HBO's Entourage) and Charlie Fox (Raul Esparza) is so fast paced, I had a hard time figuring out what they were talking about for the first few minutes. But even though it was a bit confusing, it was also kind of exhilarating and both actors do a good job delivering Mamet's lines.

Gould and Fox are two longtime friends whose relationship is about to move to a new, more lucrative, level. Gould's gotten a big promotion and Fox has convinced a popular action star to make a prison buddy movie, which he wants to bring to Gould's studio. The two giddily contemplate the money they'll rake in - but the deal has to be wrapped up by the next morning.

Enter Gould's temporary secretary, Karen, played by Elisabeth Moss of the tv series Mad Men. In the first act, Moss' character is sweet and innocent and a little timid. Gould asks her to look over a novel he's been handed for a "courtesy read" to determine whether or not it could be made into a movie. She's supposed to come over his house that evening with her report.

The second scene, with Karen at Gould's house trying to convince him to make the movie, is where Speed-the-Plow dragged a little bit for me. I don't think Piven or Moss quite pull it off, but I also think this is the weakest-written part of the play.

Mamet is obviously trying to say something about art versus commerce in Hollywood, how the studios always go for mindless entertainment over more thoughtful subjects. But this book seems so unworthy I can't understand why anyone would get worked up over it, especially not someone as savvy and experienced in the movie business as Bobby Gould. From the snippets we hear, it sounds awful - it's about the history of radioactivity and the end of the world, or something like that. I could never quite figure it out.

Plus, I didn't think Moss' Karen was so wily and seductive that she could have persuaded Gould to take on such a risky project. As he tells Karen, "if the films I make lose money, then I'm back on the streets with a sweet and silly smile on my face." And I didn't think that Piven's Gould seemed truly transformed after their evening together. I didn't sense that he had an epiphany and saw the light.

Another thing that bothered me: Mamet has constructed the play as a false dichotomy. Lots of movies get made every year, and some of them are the small, thought-provoking films that this book is supposed to represent. In fact, I think most of the major studios have specialty divisions where directors and producers can make "independent" films as well as action movies. So it's not really an either/or situation, no matter how Mamet tries to represent it.

But for me, what saves Speed-the-Plow and makes it worthwhile is Esparza's performance in the play's final scene. I wanted to see the play mainly for Piven and Moss, whom I've enjoyed in their tv roles, but I ended up loving Esparza. This was my first time seeing him on stage and he was awesome.

His disintegration at the end, his desperation, was thrilling to watch. You can see him grasping at straws, thinking on his feet. It's like this battle of wits with Karen. His life is at stake, his livelihood, everything he's tried to achieve. Here he is, about to reach the summit of his professional life, and this nobody comes from out of nowhere to block his ascent. And I didn't know who was going to win, which made it even more thrilling.

Fox can't believe that Gould wants to make a movie out of this bizarre and indecipherable book. He has a great line: "You can't tell it to me in one sentence, they can't put it in TV Guide." Which is so true - even if hardly anyone one reads TV Guide anymore. But we subscribed to it when I was a kid and I read it faithfully every week, so I knew what he meant.
Still, Speed-the-Plow got me thinking. I've discussed it with a more knowledgeable friend, and maybe there's some nuance to Mamet's writing or Piven's and Moss' performances that went by me. Unfortunately, I can't pop the dvd in for another go-round. If I lived in New York, I'd buy a cheap ticket and see it again just to make sure - and for Raul Esparza.

Great review, Esther! I thought the book as presented was blatantly weak, too, but that might have been intentional.

I don't believe the choice here is a false dichotomy, though; Bobby's just been promoted and has the option to greenlight one project: either a guaranteed blockbuster or a small, independent passion project. The question is whether he'll use his newfound (and, in Hollywood, ephemeral) clout to follow the money or his heart (for lack of a better word). He's at a point where one movie can make or break his career, literally; if he fails at this one, he doesn't get a second chance, and he knows it. So the fact that he's swayed at all by this book, to the degree that he's willing to put his entire future on the line for it, I found pretty compelling.

And Esparza in the last 15 minutes was just a joy to behold :)

Thanks, Kari! This is one I wish we could have seen together, so we could have dissected it afterward. I agree with you and Jeff - I luuuurve Raul, too. He most definitely was a joy, especially in those last 15 minutes. For that alone, I'm glad I saw the play.