Another day, another snowstorm. I might as well be living in Syracuse again, the city that once proudly proclaimed "We're snow king!" Okay, it's not quite that bad. But I do need some good news to cheer me up and keep me thinking about spring. 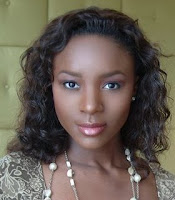 The producers of Hair have been announcing new cast members for the Broadway revival every day this week. I have to admit that I've never heard of most of them but today's list includes a familiar name: Saycon Sengbloh. I saw Sengbloh as Celie in The Color Purple, when she went on as an understudy for Fantasia. It can't be easy to go on stage in place of a performer you know most people have come to see, but I thought she was wonderful. Her transformation over the course of the musical was absorbing to watch and so moving.

She'll be reprising her role from this summer's production of Hair in Central Park, an event that I could kick myself for missing. She'll play Abraham Lincoln, be part of the White Boys Trio and a member of the tribe.

All of Sengbloh's Broadway credits thus far have replacement or understudy or standby next to them. So I'm glad this gracious and talented actress will be part of a Broadway show's original cast for the first time. (Okay, I know it's a revival, but you know what I mean!)

I'm already excited about Hair because I love the songs and I love the 1960s but this is another reason to look forward to a trip to Broadway in the spring. The musical begins previews March 6 at the Al Hirschfeld Theatre and opens March 31.
Posted by Esther at 3:40 PM

Her role isn't that huge but she makes a strong impression.

So far it seems like most of the summer cast is back and it's FAB!!!

Oh wow, it's great to hear that she made a big impression. I'm excited! "The Color Purple" was the first show Steve on Broadway and I saw together. At first, I was disappointed about Fantasia being out but Saycon really was wonderful and so nice when we met her at the stage door afterward. So I definitely have a soft spot for her in my theatergoing experience.

When I saw Hair, I had Saycon confused with Patina Renea Miller. Patina sang Age of Aquarius at the top of the show. I couldn't even tell you who Saycon was in the cast, that role is so small and unimpressive - I was expecting more because of her Broadway credits. Of course, I wasn't overly impressed with the entire show. The only thing good about being there was that it was a nice evening with my friend Chris. I guess overall the lack of much book of this show just doesn't do anything for me. I can't relate to a single character, probably because we don't know anything about them other than they are irresponsible dopeheads who seem not so concerned with the fact that the war was wrong rather than with the fact that they just couldn't be bothered to leave their drugged life of sex and rock-n-roll. This Broadway show definitely will not be getting my money.