Taking children to the theatre 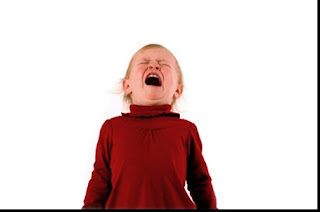 Maybe because it was my birthday weekend and because I was sitting next to Steve on Broadway and I knew what a key role the musical Annie played in spurring his love of theatre, I wanted everything to be perfect at the Saturday matinee we attended.

Well, apparently not everyone at the Providence Performing Arts Center got the message.

I've sat through shows before with talkative adults and squirming children but this was without a doubt the worst theatre audience I've ever been in. (The child at the top is used only for illustrative purposes. As far as I know, she was not in the audience.)

The two adorable little girls in front of me, who couldn't have been more than 3 or 4 years old, spent most of the show standing up in their seats and climbing over their mother until I think they collapsed from exhaustion. (Their father, at least I think it was their father, seemed pretty oblivious to his daughters' inability to sit still.)

I don't blame the kids - they were much too young to be there. I saw many other very young children being carried out of the theatre by their parents. Rest assured, if I'd been disruptive in public as a child, my parents would have taken me out of there, too.

At the end of our row there was an older child who every so often would shout something so loudly everyone in the theatre could hear. I think the child had Down Syndrome or another mental disability, so I don't want to be insensitive. I'm not saying people with disabilities should stay home. But perhaps Annie wasn't the right show for this person.

I know what you're thinking: "Esther, what did you expect at the Saturday matinee of a children's show?"

Parents, despite the way Annie is marketed as "a delightful theatrical experience for the entire family" it is not a musical for children under age 5.

It says right on the PPAC Web site that the running time is 2 hours and 30 minutes, including an intermission. It is simply too long and there is not enough action on the stage at all times to engage very young children. (Interestingly, neither the PPAC site nor the tour Web site have a suggested age for the show.)

I know every child has a different attention span. I've been in audiences at Mary Poppins and The Lion King where young children did fine. There were kids in this audience who were fine. But this is something parents have to figure out before they plop down their hard-earned money for tickets.

If you're unsure whether your children have the necessary attention level, pop a 2 1/2-hour movie in the dvd player and see how they do.

Don't get me wrong, I want children to go to the theatre and fall in love with it. I want their first Broadway musical to be a thrilling, enchanting, memorable experience. But it's got to be the right show at the right time.

If your children cannot sit still and remain quiet and focused on the action onstage, please do not bring them to a 2 1/2-hour musical. You are wasting your money, your children will never remember the experience and you're ruining the show for everyone around you. Wait a few years.

In the meantime, take them to Dora the Explorer instead.
Posted by Esther at 2:45 PM

Ugh. So sorry you had to suffer through that. But I can beat your experience. I once went to a midnight showing of THE EXORCIST (which is the scariest movie EVER!!!) where parents brought their 4-5 year olds.

Oh my gosh, that's unbelievable! What would make someone take their 4-5 year olds to a midnight movie in the first place, never mind The Exorcist! (Which is way too scary for me to ever watch.)