The little show that could 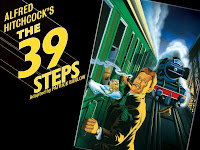 I am so proud of The 39 Steps for surviving on Broadway in a tough economic climate. This 90-minute play keeps chugging along without a star cast or name recognition. (Although I imagine Alfred Hitchcock's name on the marquee helps.) It even snagged a couple of Tony awards last year, for the lighting design by Kevin Adams and sound design by Mic Pool.

The British import, which started out in January 2008 at the American Airlines Theatre as a Roundabout production, then moved to the Cort for a commercial run, took up residence yesterday at its third and smallest Broadway venue so far: the 578-seat Helen Hayes. I think it's a great sign of this play's resilience.

I know this isn't a unique development. It probably doesn't happen all that often now because of the cost involved, and most plays are limited runs anyway. But from browsing ibdb.com I've noticed that in the past, lots of well-known, long-running shows switched theatres, sometimes more than once.

I do feel a sense of ownership about The 39 Steps, since I saw the show in September 2007 at Boston's Huntington Theatre Company, during its pre-New York tryout. And it was the subject of my first-ever Gratuitous Violins post. Okay, maybe it doesn't have the star power or intellectual heft or impressive pedigree of some other recent transfers from the West End, but I can't think of one that I've enjoyed more.

There's just something so entertaining about the way it lovingly re-creates the story of Alfred Hitchcock's 1935 thriller. It's fun and witty and clever and unlike anything else I've seen on stage. Who knew you could do so much with four actors, a few props and lots of imagination? And while there's only one member of the original cast left, I'm hoping it's just as entertaining.

At the play's Web site, you can watch clips, check out some Hitchcock spoofs and even download a study guide for parents and teachers, because "The 39 Steps is not just funny. It's highly educational!"
Posted by Esther at 9:05 AM

"highly educational"? hmm... okay... but highly entertaining yes! I was surprised at how clever it all was!

I know, the educational part surprised me, too. It is a direct quote from their Web site. I don't make this stuff up! ;-) I was just thinking about how I enjoyed The 39 Steps more than some other recent screen to stage transfers, like Spamalot and Young Frankenstein. Sometimes less is more!

We too feel a sense of pride that the Huntington's work has been on Broadway for a year now - seen by almost 1/4 million people.

I keep wanting to see it and hopefully will if I make it to NY in the next few months!

Hey Todd, thanks so much for the comment! It was great to be able to see "The 39 Steps" before its Broadway run and to be one of the first people to rave about it.

Dale, it's a very fun, clever show. You should probably see the movie first. I think you'll get more out of it that way. But I think you'd enjoy it even going in cold.

I would love to see this one!!!

It's fun - but I think you get the most out of it if you've seen the movie, just to see how faithfully and cleverly they've re-created it.