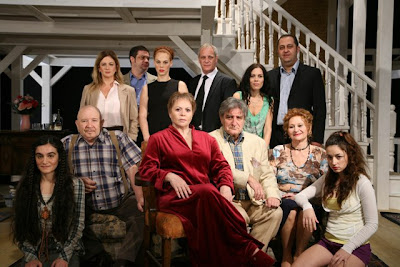 Wow, August: Osage County really is spanning the globe. I've read about the productions in London and Australia and Portugal. But somehow I missed this one. In January, there was a production in Tel Aviv, at Habima, Israel's national theatre.

I think Tracy Letts' Tony and Pulitzer-winning play would translate well into Hebrew, or any other language. After all, it's about the interaction between parents and children, husband and wives, siblings. Those are pretty universal themes.

(Except there's no letter "w" in Hebrew, so the "Weston" family of the play would probably sound more like "Veston.")

Gila Almagor, one of Israel's leading actresses, played the acid-tongued, pill-popping, cancer-stricken matriarch Violet Weston. You might remember Almagor from the Steven Spielberg movie Munich, in which she played the mother of Mossad agent Eric Bana.

In this interview, Almagor talks about how her mother's struggle with mental illness informed her portrayal of Violet.

And this is a tv commercial for the play. My Hebrew's extremely rusty but it starts out by describing the plot.

Oh my god, could you imagine Act II with Israelis? It would be brilliant.

Speaking of Tracy Letts, we saw "Superior Donuts" the other night. It might need a little rewriting but I enjoyed it a lot.

Hey Jeff, thanks for the comment. Yes, there would be a lot of gefilte fish flying around! It would be interesting to see an August revival with a different cast, say, all Latino or all African-American.

I'm so glad you liked Superior Donuts. I'm seeing it next month and I'm pretty psyched. For me, one of the attraction is that it's going to be so different from August: Osage County. I always like to see a writer or an actor or a musician tackle new subjects.