Can Wolverine rescue the Oscars?

Three reasons why the multi-talented Australian actor Hugh Jackman has been picked to host the 81st annual Academy Awards, according to The Hollywood Reporter: 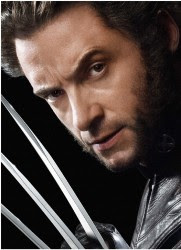 Here's what Oscars coproducer Laurence Mark had to say about Jackman, a 2004 Tony winner for Best Actor in a Musical for The Boy From Oz, possibly performing on the Feb. 22 telecast:

Would Jackman be doing a musical number himself? Mark hedged: "Let's just say that with Hugh, there'd be a good reason to do it. It's certainly extremely appealing. He's definitely not going to be doing a 10-minute comedy monologue."

I'm not a comic book fan but I really liked the X-Men movies, in which Jackman played the superhero Wolverine. If you want to see him without his facial hair and retractable claws, and hear him sing, check out Jackman's performance as Curley in the London revival of Oklahoma!, which is available on dvd.

And honestly, I think having an actor host the show will be a nice change from the comedians, whose jokes were getting a little stale anyway. Now I have to get out and see some movies.
Posted by Esther at 1:15 AM

If you had seen him in "The Boy from Oz" or even hosting the Tony Awards, you would never think of "Wolverine" as anything but a passing role. He is not "Wolverine." He is anything and everything but, that's for sure.

I think he will do a capable job. He was able to inject a lot of life into the Tony shows he hosted. And let's face it, "The Boy From Oz" is a pitiful excuse for a musical. However, the redemption lies in a solid star turn like his. He carried that show from start to finish and made it fun for the audience (and his way with an ad-lib is something akin to Pearl Bailey).

Sadly, I missed Hugh Jackman in The Boy from Oz and his hosting the Tonys. But I'm hoping he'll come back to Broadway in the Harry Houdini musical so I can see him on stage. Something to look forward to! In the meantime, I'm definitely looking forward to the Oscars now.

Btw, did either of you see him in Oklahoma?

Hugh didn't do Oklahoma! on Broadway, only in the West End. But it was filmed, and yes I have seen it. It is replayed on PBS fairly regularly. There are clips on youtube in the meantime. I'm not a fan of the barebones production, but he's wonderful. I LOVED The Boy from Oz and wish that I could have been one of thos Oz-A-Lots.

His "Oklahoma!" was taped in London in 1998 and aired in the US about four or five years ago. That production (which featured Shuler Hensley in his Olivier & Tony winning turn as Jud Fry) was released on DVD and is readily available. It's really a fantastic performance; definitely get it on the Netflix queue or something. I think you will really enjoy it

Thanks to both of you. I'll check out Oklahoma! on dvd and keep my fingers crossed that Hugh comes back to Broadway soon.