When I had the pleasure of meeting Gabriel from Modern Fabulousity, he mentioned in passing Nathaniel, a freelance writer who blogs at The Film Experience. 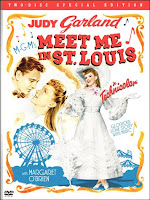 So I've been checking out his blog and I'm just in time for Musicals Month! Everyone watches the same movie and writes something about it on their blog. Nathaniel will publish his post on Saturday and link to everyone else. Sounds like fun, huh?! I'm all for blogothons.

This month's musical is 1944's Meet Me in St. Louis, starring Judy Garland as a turn-of-the century Midwestern girl, and directed by her soon-to-be husband, Vincente Minnelli.

I've never seen the movie, but I just checked it out on the Internet Movie Database, and Garland plays a character whose first name is Esther! How often does that happen in a musical? Not too often, I bet.

According to Nathaniel, Meet me in St. Louis will air on Turner Classic Movies Friday at 8 p.m. So I'll set the DVR and hopefully I can think of something reasonably intelligent to add to the discussion!
Posted by Esther at 6:17 PM

Sarah and I were just talking about this movie! It's one of my very favorites. Sad, sweet, exquisite.

Thanks Sarah, that was great! Judy looks so sweet and innocent. I'm looking forward to watching the entire movie on Friday night.

And Kari, what an insightful description: Sad, sweet, exquisite. More things in life should be exquisite. As for the sadness, I'll keep some tissues nearby!