I was sitting on the couch watching a dvd, laptop on my lap so I could multitask, when I spotted a familiar face in the first few minutes of The Visitor. It was a cameo by none other than Marian Seldes! I knew I had to stop surfing the 'net and give this movie my undivided attention. 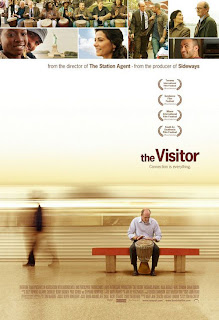 And I'm glad I did. The Visitor is well-acted and such an interesting look at contemporary New York City. Richard Jenkins, who for years was a member of Trinity Repertory Company, and also played the father in Six Feet Under, is an economics professor named Walter Vale who befriends with an illegal immigrant couple.

Walter returns to his Manhattan apartment and finds the couple, a Syrian named Tarek (played by Haaz Sleiman) and his girlfriend, Zainab, from Senegal, (played by Danai Gurira) squatting there. Realizing that they have no place else to go, and perhaps, also, because he's a bit lonely after the death of his wife, he invites them to stay. (Personally, since Tarek reacts so violently at being surprised by Walter, I would have called the police. But that would have been the end of the movie.)

He's soon caught up in their lives and seems invigorated by the pair. And they're so recognizable to anyone who's spent any time in New York City. Tarek plays the djembe, an African drum, and Zainab has a sidewalk table where she sells jewelry that she makes herself. Tarek is the friendlier of the two, inviting Walter along to clubs and teaching him to play the drums. Zainab is more distant and wary at first.

What struck me about The Visitor is that all of the characters are so wonderfully drawn and the performances are so understated. Writer and director Thomas McCarthy was also responsible for The Station Agent, another great movie about a group of unlikely friends. Here, he lets the story unfold bit by bit, with a fact revealed here or there.

When Tarek is arrested and held for being in the country illegally, Walter has to navigate this totally unfamiliar world of immigration laws and detention centers to try and help him. When Tarek's mother, Mouna (Hiam Abbass) arrives from Michigan to find out what happened to her son, Walter befriends her, too. He even takes her to The Phantom of the Opera on Broadway, a show she's longed to see.

McCarthy does lay the symbolism on a bit thick at times - at one point, Walter, Mouna and Zainab pass the Statue of Liberty as they take a ride on the Staten Island Ferry. And there seem to be a lot of strategically placed American flags in shots.

But without being too preachy, the movie does a good job of showing how the detention process works and McCarthy makes a good case for a more sane and humane policy toward illegal immigrants. This is a thought-provoking movie that shows a side of life in New York City we don't often get to see up close. And Jenkins is great. I really hope he gets an Oscar nomination.
Posted by Esther at 3:00 PM

In a perfect world, the main four actors would get an Oscar nomination. Im still holding out hope for Jenkins. Though I was really taken with Haaz Sleiman's performance as well.

I definitely agree - it was so well done, they each created such compelling characters. I'd heard good things about this movie and especially about Richard Jenkins but I was still surprised I liked it as much as I did. Like I said, usually I'm on the computer and only half paying attention but this one really grabbed me.

Yah me too. Check out Boy A as well. I put down my computer for that one too.

Jason and I went to see this movie earlier this year and it was brilliant. Exquisitely done.