My year of living theatrically - 2008 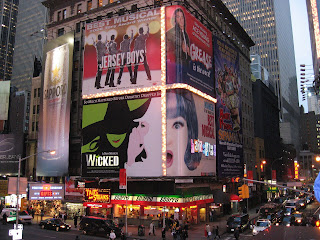 My year of living theatrically - 2008 edition - has drawn to a close. I saw 38 performances this year, eight more than in 2007. Among them were 35 plays and musicals, 1 opera, 1 concert and 1 Christmas spectacular.

There were so many terrific show-related moments, and I'll get to those later. But first, I want to mention some other ways in which this year has been memorable:

Oh, the places you'll go! I attended my very first opera, the poignant and lyrical Madama Butterfly, at the Metropolitan Opera. (And they really, really like me at the Met. They call, they write, they e-mail!) I saw the high-stepping Rockettes in the Radio City Christmas Spectacular. I heard the smooth Scottish singer Euan Morton at the Algonquin Hotel's Oak Room. I traveled to the Guthrie Theater in Minneapolis, where I watched the premiere of the very appealing musical Little House on the Prairie and saw the Mississippi River for the very first time.

Making my list, checking it twice: I checked some more names off the list of Broadway houses I've visited. In a little over 18 months I've been in 25 of the 39 Broadway theatres. By the end of next spring I'll hopefully check off a few more, and I could well be into the single digits. But I still have some long-running shows to see on the Great White Way. That means someday in the not too distant future I could be down to Wicked, Jersey Boys, The Phantom of the Opera, The Little Mermaid, Chicago and Avenue Q if I want to complete the list. (Oops, I wasn't quite clear on this: I've seen Wicked on tour, just not on Broadway, so I'll be seeing it again to cross the Gershwin Theatre off my list!)

Stage door stories: I had many memorable encounters this year, including a delightful conversation with Rondi Reed a month before she won the Tony for August: Osage County. It was the culmination of quite a day. Standing there on the sidewalk for more than a half-hour, laughing and chatting with Ms. Reed until they actually shut off the marquee lights at the Music Box Theatre, was so much fun. What a great actress and what a genuinely warm and friendly person. I hope she's back on Broadway soon.

A TKT with a view: After 18 months of passing by a construction zone whenever I went to Broadway, I finally had a chance last month to see the newly refurbished Times Square TKTS booth. It's so much nicer now. I love the view from the top of the shiny red staircase. It looks like a great place to sit in nice weather and someday, I may even buy a half-price TKT there!

Getting to know you: Becoming a theatre fan has been fun and thrilling and it's been a way for me to start writing again. But it's also enabled me to make some new friends. I'm so glad we got together in March at Angus McIndoe's for our first bloggers brunch. Every time I've gone to New York this year I've had a chance to meet people I'd only known previously through their blogs and e-mail. Getting to know everyone been wonderful. Thank-you for making 2008 such a memorable year for me.

Oddly enough, I actually go to TKTS to get Off-Broadway show deals since they usually don't have as many rush deals or coupons.

But yey your year! I'm going to have to tally mine next week and try to churn out some catch up reviews soon (ugh, I'm still SO behind).

Esther, Thanks so much for organizing the bloggers brunch - certainly a highlight for me this past year (aside, of course, from actually seeing many shows with you).

Awww, thanks for the kind words, Steve. I'm glad everyone was so enthusiastic about meeting. It's really been terrific making so many new friends. And I love seeing shows with my two wonderful brothers. Right backatcha, my friend.

Hey Vance,
It was so great to meet you. You definitely have to join us at one of our brunches. I actually didn't realize that you could get off-Broadway shows at TKTS, too. So thanks for mentioning it.

Wicked and Avenue Q are missing from your list? And Chicago too? Oh my! I've seen each of those at least twice. That makes me lucky, I've loved them each.

Hey Dale,
Oops, I wasn't too clear on this. I've seen Wicked on tour, not on Broadway. It's one of my favorites! I'll definitely be seeing it in New York at some point so I can cross the Gershwin Theatre off my list!

But no, I haven't seen Chicago or Avenue Q on stage.

I want to see Chicago (I loved the movie) but it always seems like there are so many new shows I'm trying to squeeze in when I go to New York. I think it's one of the few shows that performs on Sunday night (which was when I saw The Lion King) so hopefully I'll fit it in next year.

As for Avenue Q, I don't know. I'm afraid it'll be one of those things where everyone else around me will be laughing hysterically and I'll only be mildly amused!