When I visited San Francisco a few years ago, I spent a couple of hours walking around the Castro neighborhood. It's a nice, quiet place, filled with small shops and restaurants - perfect for browsing. But it seemed a little sad that the place where Harvey Milk ran a camera store and built a political base didn't have a more prominent memorial to him. 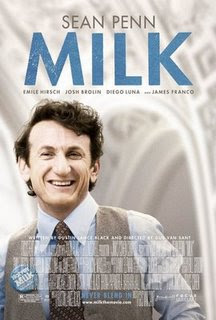 So I'm glad that we have Gus Van Sant's film Milk, and Sean Penn's engaging performance - Lawng Island accent and all - in the title role. It's a powerful, heartfelt tribute to the life and times of one of the first openly gay candidates elected to public office in the United States. And it's also a reminder of the ongoing struggle for civil rights for gay and lesbian Americans.

But I don't want to leave the impression that this is preachy or a dry history lesson. Dustin Lance Black's script tells a story that's poignant and funny and passionate and entertaining. I like the way Van Sant weaves archival footage into the movie. (In the credits, Van Sant acknowledges a debt to the excellent Oscar-winning 1984 documentary, The Times of Harvey Milk.) The classical score, with the operatic music that Milk loved, also is quite effective, giving the story an epic feel.

With his lover Scott Smith, played by a sweet and endearing James Franco, Milk leaves a closeted, miserable life in New York in the late 1960s. The two of them join hundreds of other gay men who made the Castro their home - a place where they could live openly and freely and hopefully without fear or persecution.

And Penn's Harvey Milk is irrepressible. He's smiling and confident, a man of boundless optimism and energy, fighting against police indifference, for equal rights, always looking to create alliances. He's constantly adapting - shedding his long hair and jeans for suits and ties, crafting a new message when an opponent advises him that he has to give people some hope.

I think that Penn is at his best when he's using wit and charm to disarm bigots and point out the ridiculousness of their arguments, or exhorting his followers that those words on the base of the Statue of Liberty and enshrined in the Declaration of Independence also speak to the rights of gay and lesbian citizens.

You can see why Milk attracted such a devoted group of political acolytes. And there's a terrific supporting cast. Emile Hirsch is adorable as Cleve Jones, a smart, young street hustler Milk takes under his wing and turns into an organizer. (Jones is also the person who would later conceive of the NAMES Project AIDS memorial quilt.) Alison Pill is great as Milk's tough and savvy lesbian campaign manager in a very male-dominated circle. Josh Brolin plays Dan White, Milk's fellow supervisor and assassin, as the brooding, obviously disturbed person he was.

Milk finally wins election to the San Francisco Board of Supervisors representing the Castro after redistricting creates neighborhood seats. His victory occurred during an ugly period for civil rights in this country. It was the same time as Anita Bryant's successful 1977 campaign to repeal a law in Dade County, Florida, that outlawed discrimination against gays and lesbians.

In 1978, California voters were faced with an initiative known as Proposition 6 that would have prevented gay people, or even those who supported gay rights, from working in public schools. The fight against Proposition 6 is eerily reminiscent of last fall's battle over Proposition 8 in California, which was successful in taking away the rights of gay and lesbian citizens to marry.

In a very moving scene, Milk urges his gay supporters to come out to their families and neighbors and coworkers. He tells them, "People vote two to one for us when they know one of us." Unfortunately, although I wish it were otherwise, proximity and empathy don't always go hand in hand. Still, the measure went down to defeat by more than a million votes.

For me, some of the most poignant parts of Milk were the two scenes that Van Sant uses to bookend the movie. One shows grainy black-and-white footage and newspaper clippings of the police raiding gay bars, carting off patrons as they try to cover their faces. The second, some three decades later, is a candlelight procession through San Francisco's Castro neighborhood in the wake of Harvey Milk's assassination. This time, no one is hiding.

Harvey Milk famously said, "If I'm killed, let that bullet destroy every closet door." Thirty years after his death, there about 450 openly gay and lesbian elected officials in the United States, including the mayor of the city where I live. For another three days, it'll be the largest U.S. city with an openly gay mayor.

On Jan. 1, that distinction will transfer to Portland, Oregon, when City Council member Sam Adams takes the oath of office as mayor. Five days later, Jared Polis, the first openly gay man elected to the U.S. House of Representatives as a freshman, will be sworn in to represent Colorado's Second District in Congress.

I really want to see this, but so far I haven't seen anywhere in SA where they're showing it. I suppose I'll have to wait until it's available on Netflix...

Hey Amanda,
Yeah, I hate it when something I really want to see doesn't come to my area. But the local multiplex can devote 5 screens to the latest action movie. Grrrr!

But you should check out the excellent and very moving documentary "The Times of Harvey Milk," which basically covers the same ground. You can get it from Netflix or, you can watch it for free right now on your computer at hulu.com