Today is the 20th anniversary of World AIDS Day, and bloggers around the world are uniting to raise awareness of the disease. 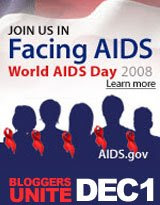 I'll always remember when David Hyde Pierce broke the fourth wall at the end of the Broadway musical Curtains to ask for donations to Broadway Cares/Equity Fights AIDS.

Of course, I knew about the organization and all of the good work it does. Since its founding in 1988, Broadway Cares has raised over $140 million for critically needed services across the United States for people with AIDS, HIV or HIV-related illnesses.

Still, there was something startling - in a good way - about having an actor who'd been playing a character a minute earlier address the audience as, well, himself. It was a reminder that Broadway is a community that includes not just the performers on stage and people who work behind the scenes but those of us who sit in the audience as well.

Today is another chance to be part of a community.

So please consider making a donation to Broadway Cares or another AIDS-related charity. (Also, check out the great online store at the Broadway Cares Web site, which has gift ideas for all of your holiday shopping needs.)

If that's not possible, and I realize it may not be in this difficult economic climate with so many worthwhile organizations making requests, take a few minutes to learn about the disease and the impact it's having around the world, especially in Africa.

Worldwide, more than 33 million people are living with HIV/AIDS, including more than 1 million Americans. Sub-Saharan Africa is more heavily affected than any other region. In three countries - Botswana, Lesotho and Swaziland - the HIV rate exceeds 20 percent of the population.
Posted by Esther at 11:08 AM