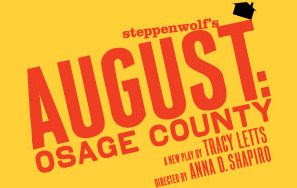 Sadly, Tracy Letts' Tony and Pulitzer-winning play August: Osage County is closing June 28, after a total of 18 previews and 648 regular performances on Broadway.

I guess I shouldn't be too disappointed.

At a time when most Broadway plays have limited runs, August: Osage County, which began life at Chicago's Steppenwolf Theatre Company, beat the odds. It was an original, contemporary American drama with an open-ended run. It will have played 18 previews and 648 regular performances since October 2007, first at the Imperial and then at the Music Box.

I still remember how excited I was about this play after reading Steve On Broadway's review of the Steppenwolf production, in August 2007, fittingly enough.

Luckily, one of my trips to Broadway coincided with the beginning of previews for August: Osage County. It was one of my most memorable theatre experiences. I'm so grateful I was able to see the play with its original cast, including the playwright's father, Dennis Letts, several months before he passed away.

What a wonderful ensemble, with witty, insightful dialog and characters and story that resonate. The 3 1/2 hours went by so quickly. I especially appreciate the way Tracy Letts illuminates the lives of women who find themselves pushed and pulled between the competing roles of wife, mother, daughter.

The national tour of August: Osage County kicks off in Denver in July, and if it comes near you, definitely go see it. I'm happy that it's coming to Boston's Colonial Theatre from May 4-16, 2010.

Estelle Parsons, who took over from Tony-winner Deanna Dunagan on Broadway, will play family matriarch Violet Weston. Although I never saw Parsons in the role, the Oscar-winner for Bonnie and Clyde is supposed to be terrific.

It's pretty amazing to think that come July, there won't be any American plays on Broadway. When Mary Stuart ends its limited run on Aug. 16, the only play on Broadway will be a very funny British import, The 39 Steps, until Sept. 15, when a revival of The Royal Family opens at the Friedman Theatre.

It's not that there aren't any great American plays in New York. I'm excited about seeing David Cromer's acclaimed production of Our Town, another transfer from the Windy City, at the Barrow Street Theatre in Greenwich Village next month.

(One of the things that August: Osage County made me realize is that in addition to being hog butcher to the world, Chicago has a lot of great theatre and wonderful actors.)

And if you want to see a contemporary American drama on Broadway, well you'll have to wait until sometime in September, when Letts' Superior Donuts, another play that originated at Steppenwolf, begins previews. It's definitely on my list.
Posted by Esther at 1:00 AM

Estelle's going to be bringing herself to Toronto with the show so I'm looking forward to it very much.

Oh great, can't wait to hear what you think of it. People I know who saw her on Broadway (and even some I don't know) thought she was great.