Breaking news via Twitter: Kevin Spacey has wrapped up work in Toronto on the movie Casino Jack and is on his way to Rhode Island - or maybe he's even here already! 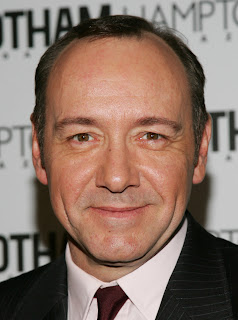 When I met Kevin at the stage door after A Moon for the Misbegotten and told him he'd gotten me to come to my very first Broadway show he replied, "Well, welcome." I'm happy to extend a welcome in return to an actor who is talented, dedicated and so gracious to his fans.

Tomorrow night, the Oscar winner, Tony winner and artistic director of London's Old Vic Theatre will receive the 2009 Pell Award for Distinguished Achievement in the Arts.

The gala event will be held at Pelican Ledge, in Newport, home of the late Rhode Island Sen. Claiborne Pell, and hosted by his widow, Nuala.

And Trinity Rep's artistic director, Curt Columbus, says Kevin "is a natural choice to receive this award because of his commitment to the live theater, the medium of film, and good works around the globe."

Kevin has been a great champion of the performing arts, especially theatre. He's done so much to encourage young people to get involved, both as participants and audience members, through the Old Vic New Voices program and his production company, Trigger Street.

According to the invitation on Trinity Rep's Web site, dress is casual elegance - a description that fits Mr. Spacey to a T.
Posted by Esther at 11:30 AM