Back from New York 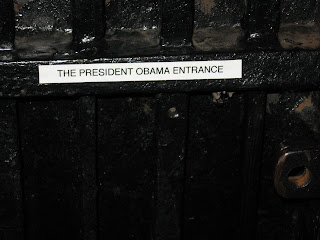 Okay, the reviews will come soon but first a few observations:

Big congratulations to Steve Loucks, better known by his nom de blog, Steve on Broadway, for being quoted in The Wall Street Journal's weekend edition for a story on theatre etiquette (or lack thereof). I'm so proud and so thrilled when a dear friend and fellow blogger is recognized. As usual, SOB was eloquent and right on the mark with his observation. Well done!

Speaking of etiquette, there were two disturbing things to report at Exit the King.

First, I heard some patrons who were sitting in the last row of the orchestra complaining at intermission that they could hear people talking behind them during the show. Please, remember that while you may be standing outside the auditorium, the people inside can hear you! Take your conversation outside to the lobby or downstairs to the lounge.

Also, at the beginning of the show, an usher kept walking up and down the aisle in the orchestra, stopping at a row near the front. One couple got up and left, so I thought that was the end of it but it went on for about 10 more minutes. At one point, he seemed to pass a note to someone. Finally, he threw his hands up in a gesture of exasperation and walked out.

If it was an emergency, I totally understand. But in that case, perhaps they should have stopped the play?

I've been to Studio 54 three times now, but Waiting for Godot was the first play I've seen there, the first Saturday matinee and the first time I'd heard the rumbling of the subway trains under my feet. It was quite noticeable throughout the show and at first, I thought it was a sound effect.

And Roundabout, you really should discount the last two seats on the far right and far left of every row in the orchestra. The sightlines weren't too bad for Godot, but c'mon. It's not fair.

It was so exciting to see Neil Patrick Harris going in the stage door after Godot. People were asking for his autograph and pictures. He said he would oblige when he came out. And I'm happy to report that he's a man of his word. Even though he probably had a million Tony-hosting related things to do, NPH very graciously signed autographs and posed for pictures. Very cute and very classy.

Also, I had a nice chat with Ernie Hudson, from Joe Turner's Come and Gone (and Ghost Busters!) about how exciting it was to have President and Mrs. Obama at the Belasco Theatre the previous week. It's too bad security concerns prevented the cast from meeting the first couple. Wouldn't it be great if someone connected with the Lincoln Center Theater who has some pull could wrangle an invitation to the White House?

While I was waiting for the final cast member to come out and sign my Playbill (soon-to-be Tony winner Roger Robinson!) I noticed a little handmade sign taped to the wrought-iron gate leading to the Belasco stage door christening it "The President Obama Entrance."

Let's hope The Shubert Organization, which owns the Belasco, makes it permanent with a plaque commemorating the visit of the nation's first African-American president. What a wonderful counterpoint to the entrance on the other side of the main doors, which black theatergoers were once forced to use to get to their seats in the segregated balcony.
Posted by Esther at 7:30 PM