Everyone loved the Jackson Five, especially the cherubic, charismatic Michael. The reasons for their out-of-the-box success boiled down to one simple truth: “The singing and the songs make us happy,” wrote soul-music biographer David Ritz. “They are moments of incandescent beauty-young, wildly optimistic.”
From The Jackson Five page at The Rock and Roll Hall of Fame and Museum 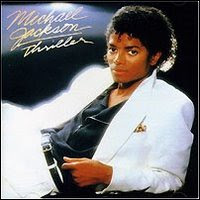 What a sad week - Ed McMahon, Farrah Fawcett, Michael Jackson all passing away. I remember seeing Jackson on tv with his brothers as a little kid, buying Thriller when it first came out, watching the videos on MTV back when MTV still played videos. Then seeing what he became over the past 25 years or so was so disturbing that I pretty much stopped paying attention.

I visited the Rock and Roll Hall of Fame Annex in New York City earlier this month, and among the memorabilia on display is the jacket Michael Jackson wore during the taping of "We Are the World in 1985. You can watch the video here.

The Wall Street Journal posted a video of the Jackson Five's first appearance on American Bandstand here. I felt a little choked up watching it. And here's an appreciation from the New York Times' Jon Pareles.
Posted by Esther at 12:20 AM

I was never a fan of Michael Jackson. I didn't have a problem with him, and I'm probably in the minority but I never thought he did all the things he was accused of doing, but I also never liked his music. It just wasn't my style. Still, his death comes as a real shock. He's just one of those people that felt like a legend, and 50 is just so young...

BTW - I didn't know you were on Twitter. I saw your updates and am following you now. :)

Esther, you hit the nail on the head for me. I thought MJ was terrific through the mid-80's. Thought he looked great, moved great and really enjoyed Thriller. I remember seeing him on MTV back then but I didn't realize until this week that they don't even have videos on the channel anymore! I guess I'm out of tough there. But by the mid-80's he started looking like a train wreck and I just stopped paying attention. He became a cartoon of himself. No surprise he died early. What a waste.