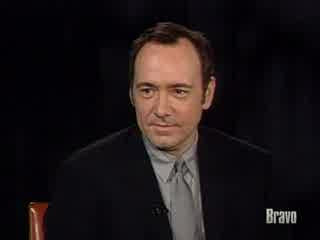 Trinity Repertory Company raised more than $300,000 at a gala in Newport Saturday, where Kevin Spacey received the Pell Award for Distinguished Achievement in the Arts.

Kevin spoke about the vital role the arts play both in the economy and education. Apparently, he also did a hilarious impression of Bill Clinton.

Speaking of impressions, before I became a fan of Kevin's I had no idea he was so skilled at doing them.

Check out his appearance on Inside the Actors Studio, where he does, among others, Jimmy Stewart, Katharine Hepburn, Al Pacino, Marlon Brando, and his mentor, Jack Lemmon. You can find it here. (I'd include it with this post but it seems to start playing automatically.)
Posted by Esther at 12:05 AM

I've always liked Kevin Spacey. I didn't know he was a comic/mimic or that he was a stage actor. As I've said here before, I've got a lot to learn.

That was priceless! Thanks for the laugh, Esther. I love Kevin, too. And your blog rules.

Well I didn't realize until I became a fan that Kevin did impressions either. But he's quite good at them! If you get a chance sometime, you should watch his entire episode from Inside the Actors Studio. He talks about how he got his start, and his love for the stage.

I have alway been a fan of Kevin Spacey. I think he is one of the most multi-talented actors out there. I LOVE impressions and his are pretty darn good.

He is very good at them. I was surprised when I first saw this clip. And he's so gracious in real life, to boot!