I planned to take in the Broadway revival of Joe Turner's Come and Gone even before the president and first lady decided to drop by the Belasco Theatre for a date night. (Sadly, they beat me there by a week!)

I'd never seen a play by August Wilson and I figured that was a serious gap in my theatergoing experience. So I was excited when this production was announced. 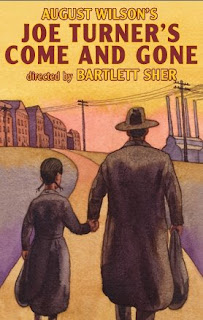 And according to his widow, Constanza Romero, Joe Turner, the second in Wilson's Century Cycle chronicling the African-American experience, was the playwright's favorite of all his works. It was first produced on Broadway in 1988, with a cast that included L. Scott Caldwell (Rose, from Lost), Angela Bassett (in her first and only Broadway appearance. Come back!) and Delroy Lindo.

Still, by the time last Saturday night rolled around, I was feeling a bit of trepidation. I knew Joe Turner was nearly three hours long and it was my second show of the day - my fourth since Thursday. A little bit of theatre fatigue was setting in.

Well, I needn't have worried. I was totally swept up by this production from beginning to end. There is nothing like great storytelling and compelling characters to give a slightly weary theatergoer her second wind.

Joe Turner takes place in 1911 in a Pittsburgh boardinghouse operated by Seth and Bertha Holly, played with immense warmth by Ernie Hudson and LaTanya Richardson Jackson. They're a long-married couple who know each other's habits all too well.

Scenic designer Michael Yeargan has created a sparse but homey kitchen with a massive oak table in the center and a small, plant-filled garden lining the edge of the stage. The smokestacks of Pittsburgh's steel mills form a backdrop.

The Hollys' boardinghouse is a stopping point in the Great Migration of black people from the South to the North in the decades after the Civil War. They were seeking a better life, trying to find their place in a new world that was not very welcoming, in which prejudice and discrimination persisted.

Seth Holly, who grew up in the North, the son of a free black man, is one of the characters we get to know the best and Hudson, who I knew from the 1984 movie Ghost Busters, gives one of my favorite performances. Another character describes him as a "windbag" and he can be a bit disdainful of the attitudes of some of those new arrivals. But he's a good man and it's so sad to see how racism stands in the way of his ambitions.

Andre Holland made me smile with his sweet portrayal of Jeremy Furlow, one of those young ex-Southerners, an aspiring musician who fancies himself a ladies man. Roger Robinson gives a memorable, Tony-winning performance as Bynum Walker, an elderly rootworker who helps give the play a supernatural element.

And Chad L. Coleman is powerful as the mysterious and taciturn Herald Loomis, who has spent four years searching for his wife. His arrival at the boardinghouse one day with his shy young daughter, Zonia, played by Amari Rose Leigh, sets tumultuous events in motion.

One of the things I found so enthralling about Joe Turner's Come and Gone is the way Wilson packs so much of the African-American experience into the play. But he does it in a way that seems organic and natural, never forced. Bit by bit we learn more about his characters and their varied stories - where they come from, what their dreams are, the obstacles in their way.

There are also moments of great laughter and joy - like the West African juba dance in the first act and the way a neighbor boy, Reuben Scott, played by a very cute Michael Cummings, skips offstage after kissing Zonia.

Bartlett Sher, who helmed this Lincoln Center Theater production, has gotten quite a bit of attention, some of it negative, for being the first white director of an August Wilson play on Broadway.

I don't have the cultural background or theatre expertise to judge whether Sher's race made a difference. All I can say is, I was moved by the performances in Joe Turner's Come and Gone and I thought the story was riveting.

As I usually do, I went to the stage door afterward to get my Playbill signed. And I made sure to tell every cast member that this was my first time seeing an August Wilson play and I thought it was wonderful.

I was especially hoping to get Roger Robinson's signature because I knew he was favored to win the Tony for Best Featured Actor in a Play. The show ended at about 11 and he didn't emerge until nearly midnight. I'd almost given up hope but I was told he'd had visitors backstage and he was often the last one out.

Finally, he came and I told him how much I enjoyed myself, that this was my first August Wilson play. He said, "Well, I hope it won't be your last."

I love your reviews, Esther. They are always so illuminating. I also love how you wait at the stage door and get autographs. I didn't even know this was possible or even usual. How exciting. I'll be sure do that next time I see a show in NY.

Thanks again, Pam! Oh yeah, I go to the stage door whenever I can. It's not even the autograph so much as a chance to meet the actors, especially if it's a performance I really loved, like with the whole cast of Joe Turner. You don't get that opportunity with a movie!