Last year, when it was just me, myself and I on the couch, I had plenty of observations about the Tony Awards. This year, I don't actually have many observations because I was very busy having fun making my debut at the annual Tony party hosted by Sarah. 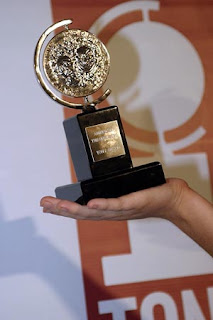 It was so great being with friends, fellow theatre fans and fellow bloggers in a swanky Regency suite. We kept the conversation and the bubbly flowing. We feasting on pizza, cucumber sandwiches, cupcakes and Rice Krispy bars, among other treats. (While Kevin kept us all up to date on the Tweets.)

Plus, I was trying to keep up with my first-ever Tony drinking game. In my case, that involved taking a sip of champagne whenever Angela Lansbury appeared on the big-screen tv, which was a lot. I think I did pretty well!

Here's a list of the 2009 Tony winners. Now, a few of the thoughts that did enter my mind in between sips of champagne:

How wonderful to see Angela Lansbury take her fifth award, for Best Featured Actress in a Play, tying her with Julie Harris for the most-ever wins. I'm excited about seeing Blithe Spirit next month, as well as all three parts of The Norman Conquests, winner for Best Revival of a Play.

And even though I was rooting for Will Swenson - because I was rooting for Hair for everything - I was happy that Gregory Jbara won Best Featured Actor in a Musical for Billy Elliot. As Billy's dad, his attitude toward his son evolves in such a moving way over the course of the musical.

I was less happy that Kiril Kulish, Trent Kowalik and David Alvarez won Best Actor in a Musical for Billy Elliot. Yes, the three actors who share the role of Billy are amazing dancers and they're adorable. But I don't think they're as compelling actors as they are dancers and they don't perform eight times a week. It's almost like the voters gave the award to the character.

But I was thrilled that Roger Robinson won for Best Featured Actor in a Play for portraying the mystical root worker Bynum Walker in Joe Turner's Come and Gone. I saw the play the evening before the Tonys and I loved it. What compelling characters and storytelling. (Watch for my review soon.)

Geoffrey Rush clearly deserved the award for Best Actor in a Play for Exit the King. He gave a performance that alternated between brilliantly comic and incredibly poignant. But I loved all of the nominated performances I saw in that category, as I did in so many other categories. And I wish there could have been more than one winner.

Loved host Neil Patrick Harris and his black leather suit and his 11 o'clock number. (Which I think was at 11:03.) Wish there were more of him on the show.

Liked it when award-winners remembered to thank spouses, significant others and children as well as agents, lawyers and managers.

Thought the Angry Dance didn't really show off Billy Elliot all that well. Although I guess the winner for Best Musical didn't really need the Tonys to boost sales.

The one performance that made me want to see the show is the one that I've already seen and loved - Hair, winner of Best Revival of a Musical. Which leads me to believe that performances on the Tonys don't win converts but merely confirm opinions you already hold. At least in my case.
Posted by Esther at 9:30 PM

Esther, hope you enjoyed your Tony night. I was among the me, myself & I group but sat there with a smile most of the evening. You know I love Billy Elliot but thought something other than the Angry Dance would have been a better choice. Oh well, what do I know. Always enjoy your perspective and thoughts....please visit me tomorrow to see a little award I have left in your honor. Cheers!

I had a great time, thanks! Yeah, I agree, the Angry Dance wasn't the best choice. I would have picked the scene with Mrs. Wilkinson, Billy and the little girls. But I guess it's selling so well it doesn't matter. I will stop by tomorrow!

I watched the Tony's this year for the first time and thoroughly enjoyed it. I said the exact same thing about the Angry Dance - weird. Great minds think alike I guess. Glad you had fun at your chi chi Tony party!

Hey Pam,
Sorry I'm kind of behind in answering comments. Yes, I had a great time. And it was very chi-chi. ;-)