My Tony picks - the plays

Like the musicals, there were a lot of new plays and revivals that I haven't had a chance to see yet. So once again, I'm leaving out a lot of categories. In fact, I haven't seen any of the nominees for Best Revival of a Play, although I am catching up with a bunch of them this weekend.

If I get a chance, I'll revise some of my picks before the Tony awards are handed out on Sunday night. (8 p.m., CBS. Be there!) 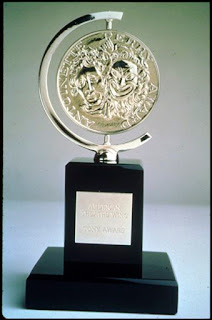 I really enjoyed Dividing the Estate. I thought it was hilarious and a great story about a family under financial strain. But I can understand why some critics called it a bit sitcom-like. (I called it a cross between Dallas and Arrested Development.) Yasmina Reza packs a lot in God of Carnage. At 90 minutes, it's a small slice of life but a very realistic one. I couldn't pinpoint one moment when things began spiraling out of control - she makes it all seem so inevitable.

I haven't seen Geoffrey Rush yet but from what I've read, he's pretty amazing. But I want to put in a good word for Raul Esparza. I went to Speed-the-Plow excited about seeing Jeremy Piven and Elisabeth Moss, two actors I've loved from tv. I came away at Raul Esparza's performance. This was my first time seeing him on stage and I thought he was amazing, especially in the final scene, where his character, Hollywood producer Charlie Fox, becomes and more desperate as he sees the chance of a lifetime slip away.

Of course, I missed Jane Fonda and I haven't seen the powerhouse queens from Mary Stuart yet. I know Marcia Gay Harden is getting a lot of the praise but I want to give a shoutout to Hope Davis. I thought she did a great job transforming from a character who was very meek and apologetic at the beginning of God of Carnage to something completely different by the end.

Okay, of all the nominees, I've only seen Hallie Foote so this isn't really a fair category for me to predict. But I thought she gave a brilliant comic performance. She's an actress I'd never seen before and I totally loved her in this play and I want to see her in more shows. No disrespect toward Ms. Lansbury or the other nominees but I just feel like showing Hallie Foote some love.
Posted by Esther at 1:15 AM

I may have to dis-invite you for this last pick. ;)

Oh, you know I'll be cheering along with you. I just wanted to give Hallie a little recognition. And hers is the only performance I've seen so far in that category. I'll go back and revise my picks later. ;-)