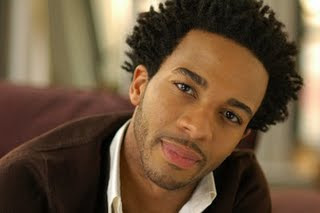 This week, BroadwaySpace released its list of "30 under 30: Broadway's hottest young stars." There are some great names, talented actors whose performances I've really enjoyed.

Then there are others who may be perfectly fine but I'm not sure they belong on a list of "Broadway's most remarkable and noteworthy performers under the age of 30." Hey, I realize these things are subjective.

More importantly, as a couple of my fellow bloggers have pointed out, the list is sorely lacking in African-American faces. Broadway & Me rightly questioned the omission of the very talented Daniel Breaker (Passing Strange, Shrek) and Jon Michael Hill (Superior Donuts.)

Those names would definitely be on my list, but I'd like to add one of my own: Andre Holland. I saw him on Broadway last spring in Joe Turner's Come and Gone. He was wonderful as Jeremy Furlow, a young roominghouse boarder newly arrived in Pittsburgh from the South.

I'm not sure how old Holland is, but he's definitely an actor to watch. While he may not be as noteworthy as some of the people on the BroadwaySpace list, his performance definitely sent me to my Playbill at intermission to find out his name.

And Holland is currently getting some great reviews off-Broadway, at the Public Theater, in The Brother/Sister Plays. Here's what Variety critic David Rooney says about his performance:

"The cast is dazzling, the majority of them creating indelible characterizations in multiple roles. Holland's metamorphoses are especially remarkable, from a plucky kid to a slippery adult and then an awkward teen, just beginning to understand how to use his sexual mojo."

Here's a good Q&A with Holland by Patrick Lee, from Just Shows to Go You. Holland, who grew up in a small town in Alabama and studied at Florida State and NYU, talks about how he got started as an actor.

"August Wilson is what attracted to me to the theatre in the first place. I read Fences in high school and I couldn’t put it down – it was the first time I had read characters in a play who sounded like people I knew."

I hope he's back on Broadway soon - maybe in next spring's Fences revival with Denzel Washington. Wouldn't that be great!

But more importantly, I hope there are opportunities for Holland other talented young African-American actors to do good work in all kinds of roles - and be recognized for it.
Posted by Esther at 2:55 PM