My next New York theatre trip 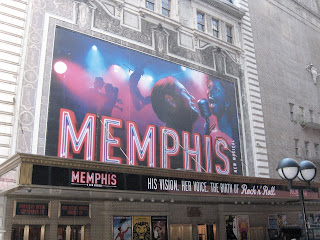 I have tickets for my next New York City theatre trip!

I'm going to see two new musicals on Broadway next month: Fela! and Memphis. Plus, I'll be taking in the revival of Stephen Sondheim's A Little Night Music, the premiere of David Mamet's Race and the long-running Wicked. Finally, I'll be seeing off-Broadway's Love, Loss and What I Wore, with Kristin Chenoweth in the cast!

It's tough, because I always want to see everything. Okay, there are exceptions: I could not bring myself to sit through 3+ hours of Hamlet. And I have zero interest in Burn the Floor. But I'm happy for people who love them because Broadway shouldn't be all about me and my tastes.

Sometimes events are beyond my control, in the case of highly praised off-Broadway shows that close before I get there, like Circle Mirror Transformation. Others, like A Streetcar Named Desire, are sold out the weekend I'll be in New York.

There are some shows I knew I wanted to see, including Race and A Little Night Music. But I was on the fence about a few until they started getting good buzz from my friends and fellow bloggers: Fela!, Memphis and Love, Loss and What I Wore.

Sure, I pay attention to the professional critics, too. A pan can deflate my interest and praise can pique my curiosity. But a positive word from a friend really puts it on my radar.

It also helps that Fela! has a Sunday evening performance. I've had great luck catching musicals on Sunday nights. I always keep Chicago, which I've never seen onstage, as my fallback but so far, I haven't had to use it. Someday.
Posted by Esther at 1:30 PM

Labels: A Little Night Music, Broadway, Fela, Loss and What I Wore, Memphis, off-Broadway, Race, She Loves Me, Wicked

Thanks Bob! Maybe we can do a New York meetup in the spring!

Sounds like you have a great trip planned. I'm green with envy. Enjoy!

Thanks, Pam! Speaking of "green with envy," you should see Wicked in Providence, if you haven't already. I just think it's a great musical.