Talking back at the theatre 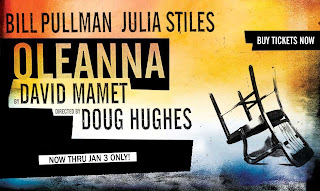 Okay, just my 2 cents on a theatre-related story this week.

The Broadway revival of Oleanna is closing Jan. 3. According to Michael Riedel's column in The New York Post, there was a bit of a dustup between playwright David Mamet and the producers about the post-performance talkbacks. Mamet did not like them but they were popular with audiences.

I don't agree with Mamet's point of view but I understand it. Apparently he believes that the play should stand on its own and not be picked apart by experts. I know some film directors feel the same way. As much as I would enjoy them, Woody Allen doesn't do dvd commentaries on his movies.

Personally, I like talkbacks. If I'd seen Oleanna, I would have stayed for it. (And I like dvd commentaries, too.) I almost always go to the theatre alone, so it's an opportunity to discuss the play with other people who've just seen it that I wouldn't have otherwise.

They can be a great opportunity to spur discussion, help you think about what you saw on stage in a way that maybe you hadn't considered, or raise issues you hadn't thought about. I think playwrights should view them as a way to keep the conversation going. And isn't that the point?

I know Trinity Repertory Company in Providence offers them after every performance of every show. I don't always have time to attend but on the occasions I have, like for the staged reading of The Laramie Project: Ten Years Later, I've definitely gotten something out of the experience.

I realize talkbacks probably work better with shorter shows or maybe after matinees, when people have more time to stay. The 39 Steps has a talkback series on Tuesdays with, among others, comedians, Hitchcock scholars and mystery writers.

It's all about choice. If you don't want to stay, don't. I haven't had a chance to attend a Broadway talkback yet but if the opportunity arises, you know I'll take it. Of course when I go to New York, I'm on vacation so I could sit there all night!
Posted by Esther at 11:50 PM

I think that talkbacks can be very nice when they're carried out properly. I can't say anything about the Oleanna talkback for the Broadway revival, but I saw a storefront production of Oleanna in Iowa a couple of years ago and there was a talkback after the performances with both the actors and the director. Everyone stayed for it and it was very interesting to hear the actors talk about their feelings when preparing for the roles. It also turned into a bit of a discussion between some of the audience members about what had occurred in the show. Granted, that was a small room with about 25 folding chairs and the current revival is on Broadway, but talkbacks can spark discussion between the actors, the artistic personal, experts, and the audience. I also think that that show benefits from having a talkback because it definitely generates discussion among audience members and there are some shows that I think benefit from having talkbacks more than others.

I was reading a post from another blogger who absolutely hated the Oleanna talkbacks, called them stupid and contrived and a cheap, tabloid-style civics lesson.

I just totally disagree, for the same reasons you mention.

I've only attended one talkback - after Cabaret at Trinity Rep. I was disappointed that it wasn't conducted by any of the actors or the director. But it was interesting to hear other audience member's points of view about some of the scenes. It surprised me that there were so many disparate interpretations of the same scene. Fascinating. Though I do think I'd rather hear from the actors and/or director.

I stay for the Trinity Rep talkbacks once in awhile and yeah, they're never done by the actors or director, which I think would be nice. They don't last very long. Maybe it's a matter of having to pay them? And I agree, it is interesting to hear how people who saw the exact same show view it differently.