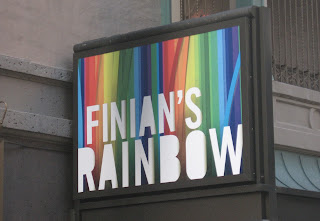 On a gray, damp day in New York City I spent an afternoon taking in the vibrant, sunny revival of Finian's Rainbow at Broadway's St. James Theatre. Yes, I'll admit I was charmed.

Not everything worked for me but in the end, the timeless music, choreography and captivating performances won me over. If I couldn't quite forget the flaws, at least I made peace with them and sat back and enjoyed the show.

They've come to America with a pot of gold that Finian has stolen from a leprechaun named Og, a delightfully comic Christopher Fitzgerald. (Will someone please give this talented actor a role on Broadway where he doesn't have to wear a funny costume?!)

The McLonergans, with Og on their trail, happen upon the community of Rainbow Valley, in the mythical Southern state of Missitucky, a place where black and white sharecroppers work side by side harvesting tobacco.

Among them is the very sweet and handsome Cheyenne Jackson as Woody Mahoney. (I'm not quite sure what Mahoney is supposed to be - whether he owns the land, works it or is some kind of community organizer. But no matter!)

Their idyllic existence is threatened by the bigoted white Senator Rawkins, a role shared terrifically by David Schramm and Chuck Cooper, who undergoes a startling transformation. I loved Cooper's rendition of the gospel-influenced "The Begat."

The musical, with a book by E.Y. "Yip" Harburg and Fred Saidy, and a score by Harburg and Burton Lane, is a mix of fantasy and social commentary that seems tame now but was daring when it opened on Broadway in 1947. Harburg "had to fight like hell to make sure all the blacks and whites got to dance together onstage," his son Ernie told The New York Times recently.

The plot of Finian's Rainbow is sort of silly and there isn't much dramatic tension or depth to the characters. I never felt the people of Rainbow Valley were really in any danger. Plus, in 2009, it was a little unsettling that their cash crop is tobacco. (Shouldn't the Playbill include a government health warning?)

Still, the musical has the kind of classic, exhilarating Broadway choreography - by director Warren Carlyle - that's so much fun to watch, especially the big ensemble numbers. The same goes for Fitzgerald's magic tricks. And Jackson well, even when he forgot a line once, it was cute to watch him recover - quickly and expertly. What a perfect reminder that anything can happen at a live performance!

Finally, how could I resist Baldwin's gorgeous voice - especially her absolutely heavenly rendition of "How Are Things in Glocca Morra?" Of course, I couldn't. After most of Finian's Rainbow has faded away, it's the memory that will stay with me the longest.
Posted by Esther at 9:00 AM