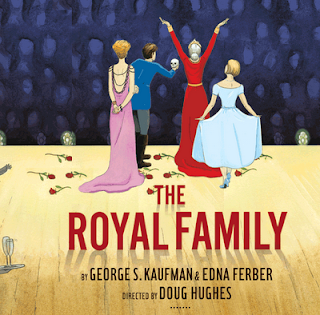 It would be perfectly understandable if The Royal Family showed its age. After all the play, by George S. Kaufman and Edna Ferber, made its Broadway debut 82 years ago, in 1927. The story is based on the Barrymore clan and the only Barrymore I know is Drew.

Well, the Manhattan Theatre Club revival of this three-act play is anything but a musty period piece. As directed by Doug Hughes, The Royal Family, at the Friedman Theatre, feels immensely witty and fresh.

What a lively, stylish homage to the 1920s. John Lee Beatty's opulent Manhattan apartment and Catherine Zuber's glamorous costumes richly evoke the decade. I sat in the front row - a first for me - and I laughed, a lot. I know some reviewers felt it started out slowly but I enjoyed myself from beginning to end.

Rosemary Harris, best known these days as Aunt May in the Spider-Man movies, is so warm and regal as matriarch Fanny Cavendish. Trouper that she is, she's determined to go back on the road again after recovering from an illness.

As her daughter Julie, a Broadway star in her own right, Jan Maxwell is superb. She's trying to cope with all of the crises that erupt in this family of theatre actors, as well as dealing with some of her own mixed feelings about continuing on the stage. When it all finally becomes too much, Maxwell is amazing to watch.

I loved the supporting cast, too, including: Kelli Barrett as Julie's daughter Gwen, who wants to quit the business and get married; John Glover and Ana Gasteyer as Fanny's brother and sister-in-law, desperately trying to revive their fading careers; Tony Roberts, a favorite of mine since Annie Hall, as the family's put-upon agent.

And Reg Rogers is perfect as Tony Cavendish, the womanizing, spendthrift son who's turned his back on the stage for - horrors - Hollywood and the movies. Luckily for us, he returns to the family hearth when things don't quite work out as planned. Rogers plays this role to the hilt, including some terrific swordplay. He's hilarious and I loved every moment of his performance.

For all the deliciously witty parts of The Royal Family, there are some thoughtful ones, too.

I loved the passion for their craft, the dedication and pride that comes through when these characters talk about the theatre. As much as they try to get away from the stage, as ambivalent as they sometimes feel, it's clearly in their blood.

The Manhattan Theatre Club calls The Royal Family "a valentine to the theatre." And it is - a funny valentine, a touching one, too. I certainly gained some insight into what it's like to be part of a family business when that business is show.
Posted by Esther at 9:00 AM

Actually, I'll bet you know Drew's great-uncle Lionel too. He played the villainous banker Henry Potter in "It's A Wonderful Life".

Forgot about that. Good point!