Practicing the fine art of giving 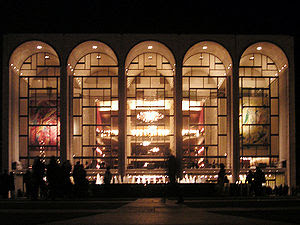 Here are two nice stories about philanthropy and the arts:

Mona Webster of Edinburgh, Scotland, who died in August at age 96, left New York City's Metropolitan Opera a bequest of $7.5 million. (The New York Times article notes that 40 percent will go to taxes but it's still a sizable chunk of change.)

Webster recalled listening to the Met's weekly radio broadcasts as far back as 1939. They're aired in the afternoon but because of the time difference she heard them in the evening.

Those broadcasts, now sponsored by homebuilder Toll Brothers, are still being heard across the United States and around the world. They reach 11 million people in 42 countries, making them one of this country's best cultural exports. The 79th season begins Dec. 12, with Puccini's Il Trittico.

In Massachusetts, a story from the Boston Globe finds that more gay couples are choosing to be recognized as couples when they donate to arts organizations.

Stephen Weiner and Donald Cornuet, who married last March on their 20th anniversary together, began to donate as a couple after joining the Opera Boston board in 2004. This year, they co-chaired the company's annual gala.

“The issue for us has been, when you look at the program books, it’s Sally X and John Y, there’s no reason it shouldn’t be the two of us,’’ said Weiner.

And named gifts, the article notes, are gold because they encourage others to emulate them.

Dan Salera and his longtime partner, Michael McCay, recently gave $50,000 to the New Repertory Theatre in Watertown and sponsored the just-ended production of Speed-the-Plow.

“There is a sense of recognition and I would say some pride when, as a gay man, you’re sitting there before the curtain goes up and you’re flipping through the program and looking at the list of donors and you see a same-sex couple,’’ said Salera.

“Others who see those names might be more inclined to give as a couple when the time comes.’’
Posted by Esther at 9:50 AM