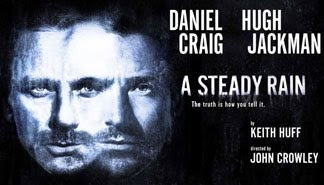 Truth be told, I'm not a big fan of the cop genre in any form: movies, tv, books. But if there's a chance to see Daniel Craig and Hugh Jackman portray two Chicago police officers on a Broadway stage, count me in.

And in A Steady Rain, it's all Craig, all Jackman, for all 90 minutes of this play's running time at the Schoenfeld Theatre. The two are onstage alone from beginning to end of Chicago playwright Keith Huff's two-hander.

Craig is Joey and Jackman is Denny, beat cops and friends since "kinneygarten" as one of them says. (I can't remember which.) Joey, a lonely bachelor with a drinking problem, is the more even-tempered and thoughtful of the two while Denny, married with children, is a hothead with a racist streak and a drug habit.

The set design by Scott Pask has Denny and Joey are sitting under bright lights on a bare stage with a black backdrop, in what could be an interrogation room. The backdrop changes a couple of times and I think it's effective. You get a sense of where the action is taking place and the change of scenery gives your eyes a rest.

At first, listening to Joey and Denny's meandering conversation, I couldn't figure out where A Steady Rain was heading. But gradually, as the talk turned to their experiences as beat cops patrolling some of Chicago's meaner streets, I really got into it.

Okay, it's hard to believe all of the things that happen to Joey and Denny, both on the job and in their personal lives, could really happen to two people. Parts of the convoluted story are probably similar to ones you've seen on dozens of cop shows or read about in the news.

Still, even though A Steady Rain was more entertaining than deeply affecting, it was great to see these two actors onstage for the first time and I was genuinely surprised at some of the twists and turns. (Maybe my ignorance of the genre was a plus!)

True, Jackman isn't entirely convincing as a rough-edged, hardened street cop but I enjoyed watching him play an unlikable character. And Craig is great as the partner who tries to rein in his friend's worst tendencies. He's the complete opposite of his most famous big-screen role. (Still, I couldn't help myself. I did think a few times, "That's James Bond!")

Huff is developing A Steady Rain as a movie and I can tell you right now it would definitely be too violent for me to watch. (Maybe after it comes out on dvd.) But onstage, where the violence is described and implied, I could handle it.

There's something mesmerizing about watching two actors simply telling a story through their tone of voice and body language, creating characters we never meet, taking us to events we never see, but feel like we do.
Posted by Esther at 12:30 AM