Filmmakers Adam Del Deo and James Stern took their cameras inside auditions for the Broadway revival of A Chorus Line, which opened in 2006 and ran for two years. It's the part of putting on a show that you don't normally get to see but in an unprecedented uh, step, they received special permission from Actors Equity. 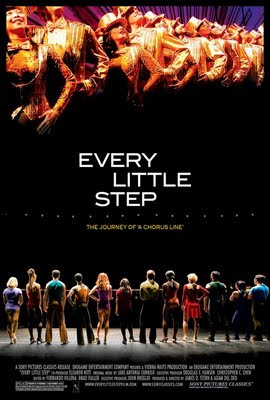 More than 2,000 dancers auditioned, some from as far away as Australia, for 19 roles. Watching them leap and pirouette reminded me how much the big chorus numbers are part of what I love about Broadway musicals.

As several actors recited the same lines one after another I couldn't even imagine how nerve-wracking it must have been for them, performing in front of people like Bob Avian, co-choreographer of the original Broadway production, and Baayork Lee, the original Connie.

I wish the filmmakers had spent a little more time on some of the individual stories of the people who came to audition. We know they've been dancing since they were kids and can't imagine doing anything else, but not much more.

And of course, they're all talented dancers. As Lee says in an interview on the dvd's extras, "If I had to audition for the show now, I would never get in."

What I enjoyed most about Every Little Step was the way it alternates taking us inside the audition room with telling us the story behind the musical.

A Chorus Line, which opened on Broadway in 1975 and ran for 15 years, grew out of taped sessions with those normally anonymous "gypsies," the dancers who populate Broadway's chorus lines and move from show to show.

And it was great to hear from some of the people who helped create the musical - including composer Marvin Hamlisch, actress Donna McKechnie, who played Cassie, and on video, the late director/choreographer Michael Bennett.

One of the most touching characters - and one of the hardest to cast - is Paul, a young Puerto Rican dancer and drag performer based on the late Nicholas Dante, who won a Pulitzer Prize and a Tony Award as the cowriter of A Chorus Line.

First, we hear Dante's voice on that original tape recording telling his story. Then, we see Sammy Williams perform the role on Broadway in a Tony-winning turn and finally, we watch Jason Tam, who would play Paul in the revival, during his audition.

That part of Every Little Step is so effective in the way it brings together the past and the present so poignantly. Avian and his colleagues are fighting back tears as Tam recites Paul's monologue. It gave me a real sense of how much A Chorus Line means to everyone involved with it.
Posted by Esther at 1:15 PM

I believe the Oscar noms aren't out yet but that Every Litte Step was short-listed.

Thanks! Got a little careless there, I guess.