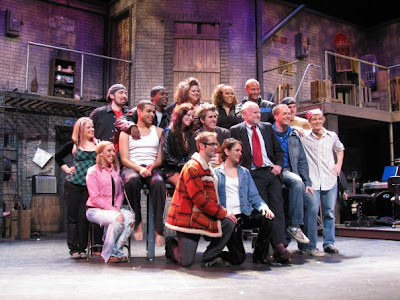 So Rocco Landesman, chairman of the National Endowment for the Arts, made it to Peoria. (That's him with the cast of Rent presented by the city's Eastlight Theatre.)

As you may recall, the former head of Broadway's Jujamcyn Theatres got himself in hot water for a comment to The New York Times about a certain city in Illinois during his maiden interview as head of the NEA:

"I don't know if there's a theater in Peoria, but I would bet that it's not as good as Steppenwolf or the Goodman [in Chicago]. There's going to be some push-back from me about democratizing arts grants to the point where you really have to answer some questions about artistic merit."
As a result, Kathy Chitwood, Eastlight's executive director, and Suzette Boulais, executive director of ArtsPartners, invited Landesman to visit the city of 113,000 and sample some of its cultural offerings.

He accepted and Friday was the big day.

Landesman promoted his Art Works initiative, designed to remind Americans of both the emotional and practical value of the arts. They satisfy our need to create, imagine, inspire (and be inspired); they also provide 5.7 million full-time jobs in the United States.

He met with representatives of Peoria's arts organizations, toured a rehabilitated warehouse district where there are plans to build a waterfront museum, and took in Rent during his 13-hour visit.

Here's coverage from The Washington Post, Bloomberg News, the Peoria Journal Star and the St. Louis Post-Dispatch. (Then if you really want to get depressed, check out what some Post and Journal Star readers think about the value of the arts. Not much.)

Most interesting to me were a couple examples that Bloomberg News writer Jeremy Gerard used to illustrate "what the arts are up against in a country that pays little more than lip service to culture."

One of his examples:

"I spoke with Erich Yetter, the artistic director of the Peoria Ballet. He told me that as recently as five years ago, he had a company of nine dancers. They’ve all been laid off; one went to work for Cirque du Soleil. Now he hires freelancers from other companies and rents costumes and scenery from groups that have gone bust."

"The well-fed youngsters of central Illinois may not have quite captured the feral look of Jonathan Larson’s Manhattan artists struggling with poverty and AIDS. But they were awfully good, and they were rewarded with resounding ovations in a packed high school auditorium. Not a paycheck, though -- they work for free."
Posted by Esther at 8:36 AM