The play that changed my life

I've already ordered The Play that Changed My Life, a book compiled by the American Theatre Wing in which 19 playwrights talk about the works that influenced them and their careers. 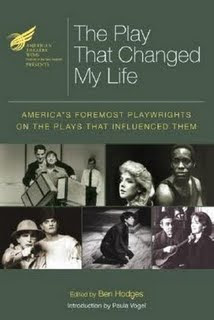 If you'd like a chance at winning a copy, and a package of other theatre-related titles from Applause Publishing, the Wing is sponsoring an essay contest.

Just write, in 350 words or less, about the show that had the greatest impact on you, when you saw it in the course of your life and most importantly, why it meant so much to you.

I'm guessing most of the people who enter will write about shows they saw when they were young children or in their teens or twenties. I didn't become a regular theatergoer until I was - let's just say older. But as my story proves, it's never too late to start.

Of course, anyone who's read this blog for any length of time knows about the play that changed my life: seeing A Moon for the Misbegotten on Broadway with Kevin Spacey in April 2007.

Before that, I'd gone to the theatre a handful of times over the years but it was never a habit. I didn't grow up with theatre-loving parents. My friends weren't theatergoers. And it never occurred to me that I could go alone. Plus, I thought I'd have to get all dressed up.

I'd only been to New York City a few times, never longer than overnight and always for a specific event. And I'd never been to a show on Broadway. But the draw of Kevin Spacey was impossible to resist. The problem was, where to begin? I didn't even know how to get tickets. (Yes, I was that clueless!)

I found his blog and e-mailed him asking for help. Along with great advice, Steve gave me his friendship, the first of many wonderful theatergoing friends I've made.

He was so excited about my first trip to Broadway that my nervousness, and any thoughts I might have harbored about backing out, evaporated. What began as a pipe dream became something I could see myself doing.

And as I pored through the archives of Steve's blog, peppering him with questions about all the shows he'd seen - and it seemed like he'd seen everything, his passion for the theatre was irresistible, too. 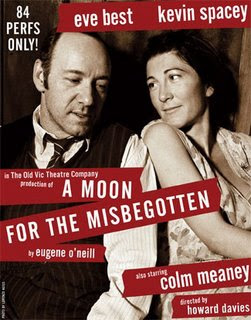 When I walked into the Brooks Atkinson Theatre and saw the set for A Moon for the Misbegotten, the same one I'd seen pictures of from the London production at the Old Vic Theatre, it was thrilling.

The orchestra section was small - more intimate than I thought it would be. I was in Row A, Seat 109 and much closer to the stage than I thought I would be. And noticing how casually my fellow theatergoers were dressed, I realized that I'd packed way too much!

The first person I saw when the play began was Eve Best as Josie Hogan, and she made an entrance I'll never forget - bursting out the front door of this little ramshackle farmhouse with incredible energy and purpose. I was mesmerized.

As for Kevin well, I was a little bit in shock. All I could think was, "It's Kevin Spacey. I can't believe it. I can't believe I'm so close." My jaw dropped in amazement, a smile crossed my face, and I'm not sure it ever completely left for 2 1/2 hours.

It was such a different experience from seeing him in a movie - much more memorable because he was right there in front of me. I saw every wrinkle and line in his face, the little strawberry-colored birthmark on the back of his neck, the way his hair curls around his ears. At one point, I swear he looked right at me.

Afterward, I stood with a small crowd at the stage door, managed to say a few words to Kevin and got his autograph. I told him it was my first time seeing a play on Broadway and that I'd made the trip just for him. He said, "welcome."

You know what, I did feel welcome in New York City. I ended up walking around Times Square for about an hour, reveling in being a part of the huge crowd, snapping pictures of theatre marquees all lit up.

And sweetheart, we're glad to have you in our fold.

Awww, thanks so much for that!