Way back on July 4, 2008, I wrote a blog post wishing Neil Simon a happy birthday and bemoaning the fact that while I'd seen most of the movie versions of his plays, I'd never seen one on stage. 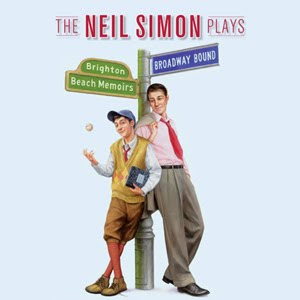 When it was announced that not one but two Simon revivals would open on Broadway this fall, with Brighton Beach Memoirs and Broadway Bound playing in repertory, I was beside myself with anticipation.

Then I started to worry. Would the plays be too Jewish? Would they be Jewish enough? Would they seem outdated? Would Noah Robbins as Simon's alter ego Eugene Morris Jerome be as good as I imagined Matthew Broderick was in his Tony-winning performance in the original Brighton Beach Memoirs?

I'm happy to report that all of my anxiety was for naught.

Brighton Beach Memoirs, set in the late 1930s, is a semi-autobiographical account of the playwright's Brooklyn childhood. The Jerome family - Eugene, his older brother Stan, and parents Jack and Kate, share their home with Kate's widowed sister Blanche and her daughters, Laurie and Nora.

Just as director David Cromer did with Our Town off-Broadway, he brilliantly strips this play down to its essence: a warm, humorous portrait of a family scraping to get by during the Great Depression. They're absolutely Jewish but you don't have to be to appreciate their struggles, their humor and their hopes and fears.

Robbins is remarkable as the 15-year-old Eugene, obsessed with baseball and discovering girls, taking careful notes about his family in his journal for the play he hopes to write someday - if he doesn't play for the Yankees. He makes Simon's quips sound so natural. What a confident, winning performance from a 19-year-old in his Broadway debut.

Dennis Boutsikaris is wonderful as Jack Jerome, a gentle, understanding man who's in danger of wearing himself out providing for the seven people living under his roof.

And I loved Laurie Metcalf as Kate, who's not spouting one-liners but getting at the real emotion contained in those lines. She is an awesome Jewish mother. It's a role that would be so easy to overplay but Metcalf gets to the strength behind the stereotype.

As Blanche, Jessica Hecht has her hands full raising her two daughters, the rebellious teenager Nora, played by Alexandra Socha, and the sweet but sickly Laurie, played by Grace Bea Lawrence, while trying not to be a burden on her sister's family.

Some of my favorite scenes take place in the tiny second-floor bedroom Eugene shares with Santino Fontana's Stanley. They argue and confide in each other and clearly love each other. Listening to Stanley explain a thing or two about the facts of life to his little brother - and watching Eugene's reaction - is hysterical.

But as funny as this play is, it's also quite serious and moving at times. We know war is looming and everything that means for a Jewish family one generation removed from the old country. Under Cromer's direction, the talented cast adjusts seamlessly as emotions change.

Designer John Lee Beatty crams a lot into his set. I sat in the left orchestra, a few rows from the stage, which is a great vantage point for Eugene and Stanley's bedroom and the front door. While the dining room table is stage right, the cast did a good enough job of projecting that I didn't feel left out during the dinner scene.

Now, I'm even more excited to see Broadway Bound, which takes place a decade later. The cast includes Boutsikaris, Metcalf, Fontana and Hecht but with Josh Grisetti as the adult Eugene. Previews begin Nov. 18 and this time, I'm not nervous at all because I know it's in great hands.
Posted by Esther at 10:00 AM

The Community Players (in Pawtucket) are doing Brighton Beach Memoirs this season. I know it's not Broadway, but I'm really looking forward to it. They always do a good job and this is a show I'm really interested in. Glad you weren't disappointed!

When I was in college I took an acting class and had to do that scene between Eugene and Stanley in the bedroom. I was Eugene. I couldn't quite pull it off.

So glad you enjoyed it every bit as much as I did (perhaps even more!). It certainly deserves a much larger audience.

Hey Pam,
You should definitely go see it. I'm looking forward to hearing your thoughts. And one thing I've learned is that there's great theatre everywhere - even in Pawtucket!

I'm glad I wasn't disappointed, too. Sometimes you build these things up in your mind. But Brighton Beach Memoirs definitely came through, and in ways I didn't expect.

Hey Jeff! Well, I give you credit for trying. I think it's probably a very difficult scene. You've really got to make it seem like you're hearing what Stanley is telling you for the first time. I hope you're going to see Brighton Beach Memoirs because I'm interested to hear your opinion, too.

Hey, Steve! I think it even exceeded my very high expectations. I knew it would be funny but I didn't realize that it would also move me a great deal. I think that's a tribute to David Cromer's direction and to the excellent cast. I really hope it finds an audience.