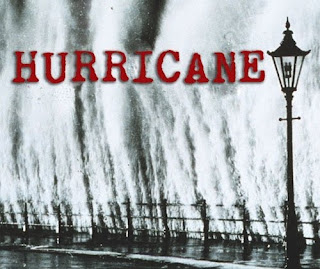 The Hurricane of 1938 was the costliest, most powerful and deadliest storm in New England history - nearly 700 people killed, wind gusts of up to 186 mph, 8,000 homes destroyed - and now, it's a musical.

Hurricane, which debuted last month at the New York Musical Theatre Festival, is about the southern Rhode Island community of Napatree Point that was wiped out when the storm struck on Sept. 21, 1938. Fifteen people were killed and all of the approximately 40 houses on the spit of land were destroyed.

The book, by Michael Holland and Eric Bernat, tells the story of how unsuspecting citizens went about their daily lives while a lone weather forecaster tried in vain to alert his superiors to the impending disaster.

I know it sounds little melodramatic but sadly, it's true.

A 28-year-old junior forecaster named Charles Pierce correctly predicted that the storm would touch down on land, not curve out to sea. He was overruled by senior forecasters who decided against issuing a hurricane warning because they didn't think one was likely in New England.

While the musical, which features Holland's score of Depression-era pop, folk songs and sea chanties, is set in the 1930s, he's aiming for something more than a history lesson. The show is described as "a testament to hope, endurance, rebirth and survival."

Holland, who grew up in Connecticut, tells The New York Times that he remembers his grandmother and other family members talking about the hurricane.

And if you're thinking he's going for some deeper meaning here, you'd be correct. Holland definitely sees parallels between what happened in Rhode Island in 1938 and the government's response to Hurricane Katrina in 2005:

"There are a lot of similarities. The preparation wasn’t what it could have been. After the 1938 hurricane, the government said it was a freak storm, when in fact someone had predicted it. They sloughed off their responsibility to the 600 or 700 people who were killed."

Unfortunately, I can't get to New York but it sounds interesting. I like it when musical theatre tackles serious, difficult subjects. Plus, there aren't that many musicals set in Rhode Island - in fact, this may be the only one.
Posted by Esther at 9:44 AM

A friend of mine is in this, but unfortunately I won't get a chance to see it.

Awww, too bad. But good for your friend to be in it! Maybe it'll have some legs. I was just intrigued because there aren't many shows set in my home state. ;-)