Tonight was the first preview for a show I'm especially excited about seeing - the Broadway revival of Neil Simon's Brighton Beach Memoirs. It'll play in repertory with Broadway Bound, which begins previews Nov. 18. 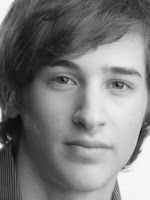 Set in Brooklyn in 1937, the play is the thinly veiled story of Simon's own childhood. It opened on Broadway on March 27, 1983, and featured 21-year-old Matthew Broderick in a Tony-winning performance as Simon's alter ego, Eugene Morris Jerome.

Noah Robbins, a Washington, D.C.-area teenager, steps into Broderick's shoes. He was a senior at Georgetown Day School when his selection was announced in May.

According to Robbins' biography, he got his start at age 11 as a singing, dancing clown at the Kennedy Center and, among his other roles, he's appeared as Max Bialystock in his high school's production of The Producers.

Thinking about Robbins made me realize that there's a trio of actors in their late teens and early 20s making their Broadway debuts this fall: Robbins, Jon Michael Hill, 24, in the play Superior Donuts and later this month, Stephanie Umoh, a 2008 Boston Conservatory graduate, in the revival of the musical Ragtime.

What's amazing about all three is that they're not playing minor characters - they have substantial roles. And none of them comes to New York with an incredible amount of stage experience. It's not like they've been in a lot of movies or tv, either.

(Josh Grisetti, who'll play Eugene in Broadway Bound, is also making his Broadway debut but he has a much longer list of credits.)

Not that any of the three is coming in cold - Hill is a Steppenwolf ensemble member and Umoh has done shows, including Ragtime, with Boston-area theatre companies.

But having to carry a substantial part of a Broadway production is still a pretty major accomplishment - imagine pitching for the Yankees at 18 or 20. It must be incredibly thrilling and nerve-wracking.

Superior Donuts opened on Thursday and Hill received great reviews, like this from The New York Times: "Played with boundless, buoyant charm by Mr. Hill, Franco is the briskly humming generator of the play’s abundant laughs."

We still have to see how Robbins and Umoh do. Brighton Beach Memoirs opens Oct. 25. Ragtime begins previews on Oct. 23 and opens Nov. 15.

But on top of all the other reasons to be excited about this season on Broadway, the fact that I have a chance to see three young performers who may very well be on the cusp of stardom is certainly a big one.