I played a little role in making theatre history last night when I attended a staged reading of The Laramie Project: Ten Years Later in Providence, performed by students in the Brown/Trinity Rep MFA program. 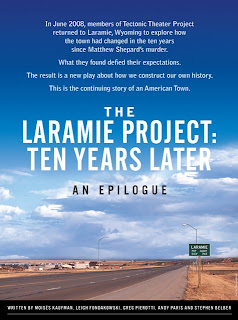 This is an epilogue to The Laramie Project, the play that examines the 1998 murder of Matthew Shepard, a 21-year-old gay student at the University of Wyoming who was tied to a fence, beaten and left to die.

Members of New York's Tectonic Theater Project created that earlier work by going to Laramie and interviewing people with a connection to the case, who knew Shepard, or were just ordinary citizens, gay and straight. In 2008, they returned to Laramie to see what had changed.

The result was The Laramie Project: Ten Years Later, presented on the same night - the anniversary of Shepard's death - in 150 venues across the country and around the world. It was incredible to be part of such a unique and powerful experience. The words "theatre community" have never seemed so real.

The 16 actors, dressed in jeans and black shirts, sat on folding chairs arranged in a gently curved semicircle, scripts on music stands in front of them. Sometimes they'd stand while reading their lines, other times they were seated. They all played multiple characters and a narrator introduced them.

At a very informative talkback afterward, Trinity Repertory Company's artistic director, Curt Columbus, compared the play to Our Town, and I can definitely see the similarity. There's no set or props. What you hear are the words of real people, culled from interviews with the Tectonic members. (Beware, there are spoilers from here on out.)

Laramie residents with no connection to the case were either tired of hearing about the murder or felt that what their community had done to remember Shepard was enough. Some cited a report on ABC's 20/20 that it wasn't a hate crime but a robbery or drug deal gone bad.

The university seemed halfhearted in its response. It's not that they've ignored the murder. We learn that there's a memorial bench to Shepard on campus and more courses on gender identity and a social justice symposium named in his honor.

But members of the university's board of trustees have dragged their feet on offering domestic partner benefits to gay and lesbian employees. They don't seem to understand that treating all of their employees equally, fairly and with dignity would be the best and highest way to honor Matthew Shepard.

The closer you get - we hear from the police who investigated the murder, people who knew Shepard, gay and lesbian citizens of Laramie - you realize the extent to which these wounds are still open and raw.

When I watched the HBO movie based on The Laramie Project, I turned down the volume when Shepard's injuries were described. I just couldn't listen. Last night, I couldn't tune out and I felt like I was going to faint while listening to Darien Johnson, the actor who plays investigator Rob Debree. Reggie Fluty (played by Ruth Coughlin), the now-retired police officer who found Shepard, says, if you'd seen him, you wouldn't doubt that this was a hate crime.

I remembered Jonas Slonaker from the movie talking about how much he loved Wyoming but also the fear that he felt as a gay man after Shepard's murder. Slonaker, played by Will Austin, now has a partner and a job at the university where he's out and accepted. But he's cautious and knows that if he worked somewhere else, it would be different. Every gay person, he says, has to find that safe pocket.

That's not to say there hasn't been progress.

Cathy Connolly, a university professor, was elected in 2008 to the state House of Representatives, becoming Wyoming's first openly gay legislator. In the play's most moving section, Connolly, played by Lauren Lubow, talks about the successful fight to defeat a proposed amendment to the state's constitution defining marriage as a relationship between a man and a woman.

Unexpected support comes from a conservative Republican colleague, Rep. Pat Childers, (played by Tommy Dickie) who discloses during the debate that one of his daughters is a lesbian. "Folks, till my dying breath there isn't anybody in this country who could say that she is a terrible person, or someone that needs to have their rights restricted."

McKinney especially is chilling for the casual way in which he speaks about the murder, not really showing any remorse, saying that he doesn't remember much about it. He tells the interviewer that he's been reading up on Nazi Germany and he's very proud of his tattoos, including the swastika, which he reckons might prevent him from visiting Germany if he should ever get out of prison.

We also hear from Judy Shepard, Matthew's mother, (played by Mary C. Davis) who has become a tireless advocate for expanding hate-crimes legislation to include people targeted because of their sexual orientation. The measure, as the play notes, still has not become law. (Although it passed the House last week.)

Shepard says that people ask her why she simply doesn't let her son go, which strikes me as offensive. She responds that it's her way of keeping Matthew alive. Since there are still hate crimes, still people being victimized because of their sexual orientation, of course we need her advocacy. It's a reminder of the terrible human toll of homophobia, of all forms of bigotry.

The students did a great job in making this work so compelling and I'm looking forward to seeing them onstage in Trinity Rep productions over the next several years.

I was at the reading in Melbourne, Australia last night and it was incredible. The space they used had a stage with four different levels, the actors scattered from top to bottom - and a single chair left empty amongst them to represent Matthew himself. There were some lighting cues - particularly during the interviews with Henderson and McKinney and some movement during the longer passages of dialogue. But mostly it was actors standing up to recite their dialogue and then sitting down again - the director reading the narration.

I've only seen the HBO version of the original play, never on stage, but I'm so glad I saw the reading of Ten Years Later - because it's a strong piece of theatre, a fascinating insight into what has changed and what has stayed the same and just knowing thousands of people around the world saw the same play on the same night/day is incredible.

My review is here.

Thanks, crossoverman. I will check out your review. I've only seen the HBO version of the original, too. And I agree - what a powerful piece of theatre and so simple, a group of people telling a story without a set or props.

It's interesting to read about how different theatres staged the same work, too. Leaving an empty chair was such a sweet touch.

The director of the production I saw had the actors playing McKinney and Henderson bring their chairs out of the circle when they were interviewed, to heighten the separation, I guess.

And it was amazing to think that we were part of a common, worldwide experience.

I imagine this worldwide experience of a play read is unprecedented, which just makes it feel even more special and as you say makes the term "theatre community" even more incredible - since like-minded people from all over the world were having similar experiences with this work at the same time. (I expect even the plays which are produced time-and-time again by theatrical companies big and small can't quite claim to have 150 productions happening at the same time.)

Yeah, I think that aspect really made it special and I'm sure it is unprecedented. There was a story in the Los Angeles Times that mentioned a similar effort in the 1930s but it was on a much smaller scale, nowhere near 150 theatres worldwide.