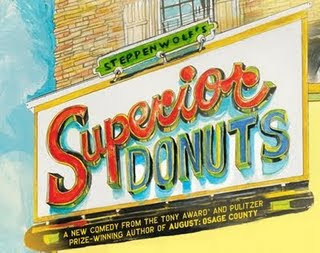 Gratuitous Violins rating: **** out of ****
If August: Osage County examined the tangled relationships among family members then Tracy Letts' new Broadway play, Superior Donuts, tackles an equally complex subject - how we relate to each other as a community, as individuals, as Americans.

Like its Tony and Pulitzer-winning predecessor, Superior Donuts arrives in New York from the Steppenwolf Theatre Company with a superb Chicago cast. It has Letts' clever, razor-sharp dialogue along with a great deal of tenderness and wit and some very insightful social commentary.

Yes, this is a small-scale character study but oh, what characters!

There's a scene near the beginning of the play when Franco Wicks, who's just been hired to work at a downscale Chicago coffee shop, pulls out of his knapsack a stack of notebooks and legal pads that comprise his Great American Novel.
Until that point, I'd been laughing hard at the banter between Jon Michael Hill's Franco and Michael McKean's Arthur Przbyszewski, the ponytailed Vietnam-era draft evader who owns Superior Donuts, the shop started by his Polish immigrant parents.
But when this earnest young black man shows Arthur his novel and quotes the African-American poet Langston Hughes, my eyes got moist and Superior Donuts grabbed ahold of my heart. As long as I can remember I've loved putting words to paper, so I've got a big soft spot for stories about aspiring writers.

Of course, I've been watching McKean for years, starting with Laverne & Shirley and This is Spinal Tap. Sometimes it's hard to lose myself in a performance by an actor I know from movie or TV roles but he's terrific as a weary, cynical man who's been beaten down by life.

Hill, in his Broadway debut, is a revelation. He's amazing as Franco - sweet, eager, a bit brash and totally engaging.

And these two actors have such great chemistry. The way their relationship evolves as Franco's irrepressible enthusiasm meets Arthur's seemingly incurable pessimism is a treat to watch. This is a story that could easily have turned into a cliche but under Tina Landau's direction, it maintains an edge.

Arthur's donut shop is located in a Chicago neighborhood that city planners might call "in transition." A Starbucks has opened nearby. The local video store owner and entrepreneur, a Russian immigrant named Max Tarasov, played by the hilarious Yasen Peyankov, is preparing to take on a Best Buy.
As James Schuette's set design perfectly conveys, Superior Donuts is one small business that's hardly prepared to compete with the gigantic chains. The paint on the radiator is peeling, the linoleum floor is worn, there's gum stuck under the tables and the ceiling tiles are filthy. The place looks greasy and unappetizing.

Once Franco comes along well, he has plenty of ideas - healthier food, bran muffins maybe, and poetry nights to attract a younger crowd. There's a hilarious scene where he tries his hand at making donuts. Arthur is skeptical, to say the least, about Franco's big plans.

While Arthur doesn't have many customers his regulars do make up a little community. There are the two beat cops - Kate Buddeke's Randy Osteen is a little flirtatious with Arthur and James Vincent Meredith's James Hailey is a delightfully nerdy Star Trek fan. Jane Alderman is great as a bewildered, slightly daffy bag lady.

One of the things I loved about August: Osage County was the way Letts illuminated the lives of women, demonstrating all of the pressures of being a wife, mother and daughter in a way that seemed so true to life.
With Superior Donuts, he does something else that I appreciate: he creates a young African-American male who's not a wisecracking character from a TV sitcom or a wanna-be rapper or professional athlete. It's tragic that we don't take as much care with smart, ambitious young men like Franco as we do with the teenagers who have a great jump shot.

Ironically, Franco urges Arthur to take off his Grateful Dead T-shirt and cut off his ponytail. (The only people who should wear ponytails are girls and ponies, he advises him.) Because sadly Franco, with his heavy winter coat, knit cap, baggy pants and unlaced boots, is just as likely to be judged.
But both Arthur and Franco defy expectations.

Franco's not someone you should be crossing the street to avoid out of fear. And Arthur, whose father called him a coward for going to Canada instead of Vietnam, isn't a man to run from a fight. He proves that by tangling with the mobster, played by Robert Maffia, who's trying to collect a debt Franco owes.

At one point, Superior Donuts brings out the biggest collective gasp I've ever heard from an audience. That's because the more you know about Arthur and Franco, the more you care about them and the more you root for them.

If it's not too much to ask, I wish Tracy Letts would return to Superior Donuts for a sequel in a decade or so. Because I really want to find out how they're doing, how America is doing.
Posted by Esther at 2:00 PM

"It's tragic that we don't take as much care with smart, ambitious young men like Franco as we do with the teenagers who have a great jump shot." Oh, amen. I'll have to go see this soon.

Tell Michael McKean I sent you! (I promised him I'd tell everyone I knew to go see Superior Donuts.) Hope you like it as much as I did.

I have a friend who grew up in kind of a similar situation - urban setting where no one really encouraged him. Not athletic but a reader and a writer. He should have had a guidance counselor to set him on the path to a four-year college. He started out at a junior college and did fine but it still makes me mad that no one saw "his" potential. So Franco really resonated with me.

Wonderful review. Makes me want to go back and see it again (and it would be for my fourth time)!

Thanks so much for the kind words Steve. I would love to see Superior Donuts again too!

Esther, last night I had the extreme pleasure of seeing August: Osage County for the first time as the tour has landed in Toronto (tomorrow night I'm going to relive the pleasure on a return visit).

Estelle Parsons is an absolute marvel and I can't say enough good about the rest of the cast and the production itself. The writing, acting and execution are just brilliant!

I'm excited now about Superior Donuts and may have to venture back to NYC for it.

I hope all is well with you!

Hey Dale, thanks for the comment! I'm so glad you enjoyed August: Osage County. I know a few people who saw the play on Broadway with Estelle Parsons and thought she was terrific. I'm hoping to see the tour when it comes to Boston in the spring.

I also really enjoyed Superior Donuts, as you can tell! Of all the pairs of actors I saw on my last trip to Broadway Michael McKean and Jon Michael Hill had the best chemistry. And that includes Mr. Craig and Mr. Jackman!

I'm doing fine. Hope you are, too!

Found you while googling reviews for this play. I loved August, but other reviewers didn't like this one much! I enjoyed your ideas on it. I read through some of your other reviews, looking for some shows to see next month. Thanks for the help!

Thanks for the comment, Beeswax! I guess some reviewers felt Superior Donuts wasn't as epic or ambitious as August. But I have to disagree. In its own way, Superior Donuts is just as compelling and filled with the memorable characters that Tracy Letts creates. Hope you have a great trip!

After seeing AOC last season and Superior Donuts yesterday afternoon, I'm telling everybody that it was our favorite this trip. The Absolute-Must-See Play. No gimmicks or tricks. Just amazing writing and acting that truly exhausted us. This is what theater is supposed to be. An experience you can't get at the movies, etc. We would love to see it again as well.

Hi Nicardo, thanks for the comment and I'm glad you enjoyed Superior Donuts! I agree with everything you said - no gimmicks, just solid acting and great writing. Tracy Letts has such a way with sharp, witty dialogue and creating memorable characters. Just great storytelling. Definitely what theatre is supposed to be!