Why I could never really hate Hamlet 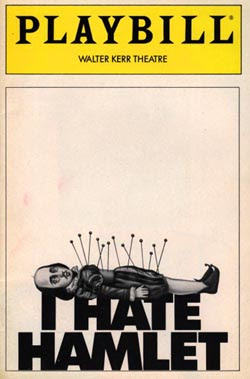 While I was driving around doing errands today I listened to a very entertaining Downstage Center interview with playwright Paul Rudnick.

He relates, in vivid detail, the story behind his romantic comedy I Hate Hamlet, which ran at the Walter Kerr Theatre for three months in 1991. It's certainly one of the more bizarre stories of a star-crossed Broadway production that I've heard.

And while I've never seen it, you could say that I Hate Hamlet has played a very indirect role in my life.

The play got mixed reviews, including a lukewarm one from Frank Rich in The New York Times, who says that while there are some laughs and some good performances, Rudnick can't quite "recall the screwy comic style" that he's trying to achieve.

But I think the premise sounds pretty funny - a TV actor moves to New York to take on the greatest male theatrical role - Hamlet. The only problem is, he hates Hamlet and summons the ghost of John Barrymore, who once lived in his apartment, for support and guidance.

The actor Andrew Rally was played by Evan Handler, who would later be so sweet and funny as Charlotte's divorce-lawyer husband, Harry Goldenblatt, in Sex and the City. And Scottish actor Nicol Williamson portrayed the ghost of John Barrymore.

Things didn't end well between them. During a swordplay scene, Williamson stabbed Handler in the buttocks. Handler walked off the stage and left the play. He wanted to bring Williamson and the production up on charges. Incredibly, Williamson wasn't fired. It turned out to be Handler's last Broadway role thus far.

Many years later, Rudnick wrote about the history of I Hate Hamlet for The New Yorker, including this very telling section about an introductory lunch with Williamson at a midtown Manhattan restaurant:

"He beguiled everyone with tales of beautiful women, show business, and air travel. He was an incipient tyrant, an Amin or an Evita, caught at an early stage, where charm was of the essence in crafting a grateful, adoring cult. Clearly, here was Barrymore.

"After many hours, as the group departed, Nicol slung a long arm over my shoulders and said, 'Dear fellow, I know you’ve heard tattle, but don’t believe a word. I’m in top, fighting form. And I haven’t touched a drop in over a year.'

"I chose to believe it, despite a quick backward glance at the table, which held a brandy snifter, a wine bottle, and a beer mug, all of which had been recently emptied into Nicol."

Now, you're wondering how this relates to me.

I Hate Hamlet did garner a Tony nomination, for Adam Arkin for Best Featured Actor in a Play. But the award that year went to Kevin Spacey, for Lost in Yonkers.

Who knows, if I Hate Hamlet had been better received, maybe Arkin would have won. Maybe Kevin Spacey wouldn't have gone on to movies and get his two Oscars and make his Bobby Darin biopic Beyond the Sea, which so captured my attention and changed my life for good.

But he did win and as Shakespeare said, all's well that ends well.

Nicol Williamson has had quite the reputation for erratic and unprofessional behavior. When he was appearing as Henry VIII in the failed Rodgers and Harnick musical "Rex" in 1976, he famously slapped an actor across the face in view of a shocked audience during the curtain call.

The actor, a member of the ensemble had said "That's a wrap." and Williamson apparently thought he said "That was crap."

Lots of other weird antics, like walking off during a performance of "Hamlet" and also striking producer David Merrick. If I'm not mistaken I believe Helen Mirren really disliked working with him, too.

Unbelievable! Thanks for filling me in. Paul Rudnick's New Yorker article is very interesting. Apparently Williamson had been a problem throughout the production.

Anyway, I Hate Hamlet sounds funny. Too bad it can't play in repertory with Hamlet!