Where have all the Neil Simon fans gone? 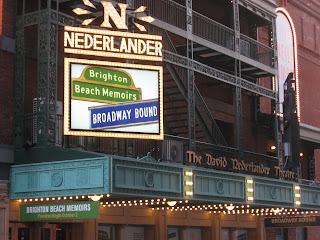 I can't believe it. I saw the Broadway revival of Neil Simon's Brighton Beach Memoirs a week ago tonight and now, a provisional closing notice has been posted for Sunday. Its companion, Broadway Bound, which I was so looking forward to seeing, has been canceled. I feel like crying.

Why can't a play with so much humor and heart, with a terrific cast, find an audience? I mean, newcomer Noah Robbins is hilarious and sweet as Simon's teenage alter ego, Eugene Morris Jerome. And Laurie Metcalf exudes so much strength in a memorable performance as his mother, Kate.

Last week, Brighton Beach Memoirs could fill just 61 percent of the 1,200 seats at the Nederlander Theatre, with an average paid admission of only $21. 32. With lackluster ticket sales, the producers simply couldn't justify spending any more money, a source told The New York Times.

The original production opened in 1983 and ran for three years, making a star out of Matthew Broderick, who garnered a Tony award. What happened this time?

Are fans of Neil Simon simply dying out and not being replaced, as David Edelstein implies in New York magazine? Edelstein admits that Simon's plays "connected with their audience on a level that theater almost never does anymore" but questions whether they can be made to seem fresh or new.

I disagree. I think director David Cromer brought a level of depth and understanding to Brighton Beach Memoirs that I wasn't expecting. The story of a struggling Jewish family during the Depression seemed so relevant. It wasn't at all an exercise in nostalgia. (And as I said in my review, you didn't have to be Jewish to relate.)

According to the most recent statistics from the League of American Theatre Producers, tourists purchased about 65 percent of the nearly 12.3 million tickets sold to Broadway shows. And foreign tourists comprised more than 15 percent of attendees.

That's great for the New York City economy but not so good for those of us who love plays and don't care whether or not there's a famous face in the cast.

President and Mrs. Obama's trip to see Joe Turner's Come and Gone in the spring is the exception to the rule - it seems like most people come to Broadway these days to see a musical or someone they recognize from movies or television.

I guess the issue is closer to what producer David Richenthal told The New York Times earlier in the week about casting Abigail Breslin as Helen Keller in a Broadway revival of The Miracle Worker:

“It’s simply naïve to think that in this day and age, you’ll be able to sell tickets to a play revival solely on the potential of the production to be a great show or on the potential for an unknown actress to give a breakthrough performance. I would consider it financially irresponsible to approach a major revival without making a serious effort to get a star.”

Hey, I'm not knocking it. Those tourists pay salaries and keep thousands of small businesses afloat. I love seeing musicals and big stars, too. But we're pretty close to the point where Broadway consists of musicals and limited runs of plays with celebrities.

As a fan of 20th century American drama who always hopes to discover a great performance by an actor who's unknown to me, that makes me sad.
Posted by Esther at 11:05 PM

A star gets people in the door. A good play gets them to stay. No star? You'll need a longer period of time to get your name out there and it should have been built into the budget. Tourists don't know what shows are playing especially when they open and it takes several months, not weeks, before word is truly out.

And to be honest, while Neil Simon might have been a name, I really only know him from old movies and I don't think I even realized Broadway Bound was part his his BBM series until this revival. And I'm actually INTO THEATRE.

Especially with good reviews, I can't believe they are pulling it so fast, and that they expected audiences right away. I find it almost silly.

Yeah, you make some very good points. I do kind of wonder about the marketing effort.

Look at how active a show like Finian's Rainbow is on twitter. When Brighton Beach Memoirs had its press day we were promised live tweets from the event. I think there were about five. Seriously, that's free publicity.

I also wonder how much money they had to work with in the first place. Perhaps doing two plays was too ambitious.

I actually thought two plays was a brilliant idea. One marketing campaign. TWO SHOWS! But there was barely any ads or notices.

I would have pushed the most recognizable actor Laurie Metcalf and the young boy that you said is super charming and got them onto any show they could. Regis & Kelly if they could have. Cable show. Even fly out to Bonnie Hunt in LA (I'm assuming they would not be able to book Ellen).

Then sell the idea that it's a new take on a comforting old play. I think they relied too much on "Neil Simon" to sell their plays and I think they overestimated his pull.

Because it was David Cromer that sold me, not Neil Simon. (Plus, so far, I think I've only really loved Barefoot in the Park of the stuff I've seen and that was probably because Robert Redford was hot!).

Personally I think Broadway needs to look forward with new modern plays but I know it's a risk, but look how it turned out for August Osage? (Granted, Superior Donuts is a bit too much of a throwback to 70's sitcoms to me to repeat AOC's huge success). It's probably why I'm so excited for Next Fall to transfer, despite the fact that it might be too small a play for Broadway, at least it's "now". (Royal Family is doing well enough but I think mainly on subscription base). In the Next room intrigues me too but I think it's also got some padding with LCT subscribers. On the other hand, reason to be pretty failed with a modern play, but I think Neil Labute is also quite prolific and automatically turns a lot of people off. More than he turns people on.

I might not be a good example, but I am certainly of a younger generation and I loved Neil Simon's plays when I was in my preteen years and I still do. (Although, I'm a bit sick of "The Odd Couple," but that's because I've seen so many productions.) I might also be incorrect in thinking Laurie Metcalf is a star. I thought she was a star, but her name isn't on the marquee.

I'm very shocked that they're pulling it this early because the show hasn't even run that long. And I would like to think that the show would maybe pick up ticket sales as time progressed. I'm also very saddened by this news because I was hoping that it would still be running when my dad and I would finally get to New York. (My dad also loves Neil Simon's writing.)

Although, I'm curious what this might do to the planned revival of "Picnic" that Cromer was to direct on Broadway next year because "Picnic" is even less well known than any of these plays, I think.

Not to knock Neil Simon tho. (if I may have sounded harsh).

I'm wondering if also because his plays tend to get presented in regional theatres and schools, if people want to see something different on Broadway, unless there was a major star attached that would make it viewable again? (Think All My Sons) If someone's going to Broadway and spending all that change, they want to see something new, something talked about (people still keep asking what Wicked is all about and that they want to see it), or something they can talk about (like seeing a star on Bwy).

That is really too bad. As you know I'm looking forward to seeing Brighton Beach Memoirs next year at a local season. I'm surprised there isn't more interest in this show. But Vance makes a good point. Maybe it needed a "star". How sad.

Thanks for the comments. I'm still very sad today but they help make me feel better.

I don't know what the problem was - people who just weren't equipped to market a show in the 21st century? Maybe Simon's veteran producer Manny Azenberg just overestimated the ability to sell the play on Neil Simon's name alone?
Maybe a more centrally located theatre would have helped?

I agree with Monica, Laurie Metcalf was probably the most well-known person in the cast. Although probably not so much that her name on the marquee would have sold a lot of tickets. But it couldn't have hurt!

I loved reasons to be pretty, a show that I resisted seeing because of Neil LaBute's reputation for writing not-so-great female characters. But no stars, no Tony awards and it went nowhere.

Like Vance says, maybe it's only the nonprofits, like MCT and Lincoln Center, with their subscription base, that can give plays a chance.

And I agree - I would have gotten Metcalf and Robbins way more publicity! When I talked to David Cromer at Our Town and told him how much I was looking forward to BBM, he specifically mentioned that Laurie Metcalf was in the cast.

Good point Monica, about Picnic, too. I hope that still goes forward and David Cromer isn't too discouraged. Although I know it's a tough weekend for him and the entire cast. They deserved better.

I know, Pam. But basically, that's Broadway at this point in history. Stars sell tickets to plays. Anyway, I'll have to look up that local production of Brighton Beach Memoirs!

Brighton Beach Memoirs will be playing at The Community Players in Pawtucket from June 11- 20, 2010