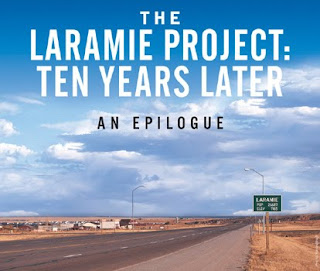 Monday is normally a dark night for theatres in the United States but tonight is different.

An extraordinary event will take place when more than 150 theatres present a staged reading of the same work - The Laramie Project: 10 Years Later, an 80-minute epilogue to the play about the murder of Matthew Shepard.

Today marks the 11th anniversary of Shepard's death. The 21-year-old University of Wyoming student, targeted by his killers because he was gay, was tied to a fence, beaten and left to die on the outskirts of Laramie in October 1998.

Five weeks later, members of New York's Tectonic Theater Project, including cofounder Moises Kaufman, traveled to Wyoming to interview people who knew Shepard or were connected with the case or were just ordinary citizens, straight and gay.

After a year, the transcripts were turned into the play The Laramie Project, which opened off-Broadway in 2000. It later became an HBO movie, which I watched last year.

It's a horrific story and heartbreaking to hear gay and lesbian citizens talk about how they lived quietly, in fear, before the death of Matthew Shepard. And it's also inspiring to hear how his death galvanized them, along with many straight Wyoming citizens, to speak out against homophobia, no matter what the consequences. But there are also interviews with others who seem totally unaware of their bigotry.

In 2008, Kaufman and Tectonic returned to Laramie for more interviews. They also spoke with Matthew's mother Judy Shepard, and Aaron McKinney, one of the men convicted of his murder. The Laramie Project: 10 Years Later is the result.

"We went there with a hypothesis that there would have been great change, and that was correct," Kaufman told the Los Angeles Times. "Whether the change is for better or worse or both is what people will see when they come to the show."

Greg Reiner, Tectonic's executive director, says interest in the epilogue demonstrates the power of Matthew Shepard's story "as part of our collective history and as a lesson to all about homophobia, what is means to be gay in a small town and how stories must be re-told to ensure that the legacy of these kinds of incidents is correct."

In Rhode Island, the play will be presented by students in the Brown/Trinity Rep MFA program at 7 p.m. at the Pell Chafee Performance Center, 87 Empire St., Providence; by Brown University undergraduates at the Leeds Theatre on campus at 8 p.m.; and at the University of Rhode Island's Fine Arts Center, 105 Upper College Road, Kingston, at 8 p.m. All are free and open to the public.
Posted by Esther at 12:19 AM

About the Laramie Project, people have the right to raise questions. Why did Matthew Shepard get in a car with straight guys in the middle of the night? (it’s amazing to me that no one has raised this question). Recently in a Newsweek interview, his mother , Judy Shepard, said that Matthew had a "dark side." Did he seek out dangerous situations with heterosexual males? Since Matthew obviously had "gaydar," he knew he was going out with straight men.
An earlier episode in his life seems to show his penchant for seeking this kind of danger. In a March, 1999 interview with Vanity Fair, Judy Shepard discussed that while Matthew was on vacation in Morocco during his senior year in high school, a gang there raped him. Again, it seems that Matthew Shepard put himself in a perilous situation with straight males (I've been to Morocco many times and people don't get dragged off the street and raped).
Obviously, Shepard didn't deserve to be murdered, but it is doubtful that he was the saintly martyr he is made out to be.

Interestingly, at the end of "The Laramie Project: Ten Years Later" one of the cast members, portraying a friend of Matthew Shepard's, remarks on how he's become a symbol.

I agree with you, it's important to see Matthew first and foremost as a human being - a friend, a brother, a son, an individual created in God's image. I think that's the way his family and friends would want him to be remembered.

Whether he was a saint isn't the point. Human beings are flawed, we make mistakes. I think everyone at some point in their life has gotten into a situation where they've made a bad decision - they're someplace they shouldn't have been, they've gotten involved with the wrong person, whatever.

No one deserved to be targeted because of their race or religion or ethnic background or gender or sexual orientation. And it's clear Matthew Shepard was targeted because he was gay. If you listen to the interview with one of his murderers that's recounted in the play, he admits it.

In one sense Matthew Shepard is a symbol - of the homophobia that's all too pervasive in our society. It's just about the last acceptable prejudice. It starts with the casual way people will say things like "That's so gay." And it ends with kids being bullied to the point of suicide, to gay-bashing.

When I think about this murder I think about my friends who are gay and lesbian, how much I want them to be safe, to live in a world where they don't have to worry about being in the wrong place at the wrong time because of their sexual orientation.