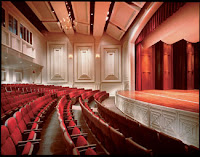 It's comforting to feel that you're in control when you're taking a long trip on a train or an airplane. There's no awkward "excuse me" while you climb over the legs of the person sitting next to you to reach to the ladies room or for a drink of water or to get something out of the overhead compartment. But I'm not sure I'd be willing to pay extra for an aisle seat.

So I was surprised by this story at Playbill that some Broadway shows are charging extra to sit on the aisle in the orchestra section.

Among them are the upcoming revival of The Seagull. An aisle seat will set you back an extra $25. But you can't just buy an aisle seat. You have to purchase it as a pair, with the seat next to it, which isn't on the aisle. If I'm reading the story correctly, you have to pay an extra $25 for that seat, too. I guess theatergoers who go by themselves, as I often do, are out of luck.

Apparently, this isn't something new. I didn't realize it, but Spring Awakening has been charging $23 extra for its aisle seats, and they also must be purchased in pairs. Gypsy charges an extra $18 for an aisle seat, also as part of a pair. (This makes me mad. Why can't you purchase a single aisle seat? What do these shows have against solitary theatergoers?)

Is it worth it? Sure, it would be exciting when Patti LuPone comes marching down the aisle at the start of Gypsy, shouting "Sing out, Louise!" Although honestly, when I saw Gypsy last summer at City Center, I was three seats off the aisle, and that was pretty thrilling, too. And I'll admit that the aisle is a very cool place to be during the parade of animals at the beginning of The Lion King. I guess, like me, there are some people who simply feel more comfortable sitting on the aisle.

But other than that, are there that many shows where you'd pay extra? Paying more to sit closer to the stage I can understand. And what if you're not on the aisle where Mamma Rose comes marching down? It doesn't seem like that seat would be worth an extra $18.

It's getting to the point where the pricing structure in a Broadway theatre is getting as varied and complex as buying a seat on a plane. What's next, a fuel surcharge?
Posted by Esther at 8:53 AM