Obama and the bully pulpit 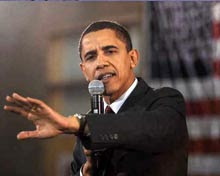 It was a day late, but last night I finally had a chance to listen to Barack Obama's entire acceptance speech at the Democratic National Convention. A few days ago, I mentioned President Lyndon Johnson's use of the bully pulpit on civil rights. What struck me about Obama's speech is that he did the same thing, especially in this passage:

"I know there are differences on same-sex marriage, but surely we can agree that our gay and lesbian brothers and sisters deserve to visit the person they love in the hospital and to live lives free of discrimination."

Too often when discussing gay marriage the opponents use this scare tactic: it'll harm families and children. Of course, that argument is ridiculous and disgusting and hateful. Obama turned the debate on its head: it's not about this supposed "threat" to heterosexual families, it's ensuring rights for gay and lesbian families.

In one sentence, Obama cut through the fear and bigotry and got to the core of the matter: it's about something as basic as being able to ensure that you can visit your loved one in the hospital. And the fact is, it's just a lot easier to do that when you can simply say, "That's my spouse in the emergency room."

I was moved when Obama referred to "our gay and lesbian brothers and sisters." Like Johnson did with the struggle to ensure voting rights for African-Americans, he used language not to divide us as a nation, but to bring us together, not to take away anyone's civil rights, but to expand civil rights to include more Americans.

Obama's speech was a bit long and tended a bit toward the policy wonk at times. He's been accused of being more style than substance, so I understand why he took that route. But I thought his conclusion, when he referred to Martin Luther King's "I have a dream" speech 45 years ago to the day, was inspiring:

"But what the people heard instead -- people of every creed and color, from every walk of life -- is that, in America, our destiny is inextricably linked, that together our dreams can be one.

"We cannot walk alone," the preacher cried. "And as we walk, we must make the pledge that we shall always march ahead. We cannot turn back."

That was the first political speech I've heard this time around that brought up homosexuals and the issue of gay marriage. I havent' heard them all, of course, so maybe I just missed it, but usually politicians seem to avoid this subject unless directly asked (and maybe even then) so I was very impressed that he brought it up. He did it well.

I like the way Obama brought up the topic of gay marriage in the context of "we're all Americans" and there are things we should all be able to agree on. By saying "we can agree" and "brothers and sisters," he focused on the things that unite us, not the things that divide us. The language was very inclusive. Like Lyndon Johnson did with voting rights, he didn't make it "their" struggle, but "our" struggle. Sure, it would have been nicer if he'd gone even further in supporting gay marriage, but it's a start.