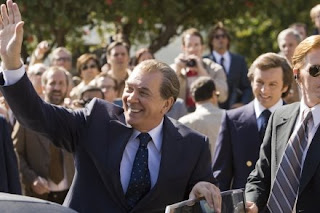 Universal has released the trailer for Frost/Nixon, directed by Ron Howard. The movie is about the series of post-Watergate television interviews that the ambitious British talk-show host conducted with the disgraced former U.S. president. You can watch the trailer here.

Frost/Nixon, which opens Dec. 5, stars Michael Sheen as David Frost and Frank Langella as Richard Nixon. (That's Langella's Nixon waving and Sheen's Frost standing behind him, in the blue blazer). Both actors are reprising their roles from the widely praised play, which ran in London and on Broadway. Langella won a Tony award for best actor in a play.

British playwright and screenwriter Peter Morgan, who wrote Frost/Nixon, also wrote the screenplay for The Queen, which was my favorite movie of 2006. I'd read a lot of great things about Frost/Nixon from its London premiere. Next to A Moon for the Misbegotten, it was the one play I was most excited about seeing last year, on my first trip to Broadway.

I have to admit, I was slightly underwhelmed. As far as Morgan's work goes, I think I enjoyed The Queen more. The on-screen portraits of Britain's Queen Elizabeth II and Prime Minister Tony Blair seemed a little more fleshed out than the portraits on stage of David Frost and Richard Nixon.

For some reason, I thought Frost/Nixon would be more of the two men alone, parrying back and forth in their one-on-one interviews conducted in 1977, three years after Nixon's resignation. I didn't expect quite so much from the minor characters - "handlers" on both sides.

Still, I was fascinated by what the play had to say about the relationship between journalists and politicians, how each side uses the other, usually to mutual benefit. Both Frost and Nixon saw the interviews as a chance to repair their battered reputations, make a comeback and get a big payday.

But the play also shows how the two men were adversaries. On stage, I loved how Michael Sheen's body language evolved during the interviews. He obviously wants to get Nixon to talk about Watergate, the one subject that will make the interviews a success. Nixon, obviously, wants to talk about anything but Watergate. As many critics have observed, it's almost like watching a boxing match.

One of the points that Morgan is trying to make is that these interviews were groundbreaking. They were among the first, if not the first, "confessional" television interviews. Nowadays, public figures routinely go on television to confess their sins, ask for forgiveness or repair their reputations, often in connection with a book or movie they're promoting.

It's hard to tell from a trailer, but Langella's Nixon struck me as more cartoon-like than it did on stage. For all the accolades Langella received, it was actually the desperation of Michael Sheen's Frost as he tries to get Nixon to agree to the interviews, and to talk about Watergate, that fascinated me more. Maybe that's because I knew less about him.

I've seen a few musicals that have been transferred recently to the big screen - Hairspray, Sweeney Todd, Mamma Mia! But this will be the first movie version of a new play that I've seen on Broadway. I'm interested in what the transition to a different medium will look like - what's lost, what's gained and what stays pretty much the same.
Posted by Esther at 10:52 AM

After all the praise that has been heaped upon the stage version (and not having been able to see it), I was waiting for the trailer to be released so I could get a good feel for the movie. It has a number of good actors in it (Michael Sheen seems to be coming into his own lately), and the trailer does a good job or making this all seem intriguing. Hard to really say until I see the movie, but I plan to give it a try.

Like I said, I actually found Michael Sheen's Frost a more intriguing and interesting character. And Sheen was good. Just the way he constantly shifted position on his chair during the interviews was pretty terrific. It was excellent use of body language! I am looking forward to the movie and I'll be looking forward to your take on it, too.

Funny I should find this today, but the stage version will be in LA in March. I suppose by then I will probably have seen the movie, but perhaps will it will spur me on to see the play (or not).

I forgot to mention the tour! It stars Stacey Keach as Nixon and Alan Cox as David Frost. I guess you'll decide after you've seen the movie whether you've had enough or you want more!