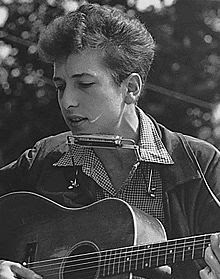 On Sunday, Bob Dylan will perform at the Virgin Mobile Festival in Baltimore. In honor of the occasion, fans of Zimmy are weighing in at The Washington Post with their Top 5 Dylan songs.

Dylan has always been one of my favorite songwriters, even when I preferred other people singing his songs. I was shocked that so few people mentioned my all-time favorite, so I came up with a list of my own. (For a different take on the matter, my friend Dan weighs in with his picks at Media Nation.)

1. Blowin' in the Wind (1962) - Based on a spiritual, "No More Auction Block," this song became an anthem of the civil-rights movement, especially after it was recorded by Peter, Paul and Mary. I think it's an American classic, and Dylan's finest song. (I'm certain it's also the first Bob Dylan song I ever heard). While some critics contend that the lyrics are ambiguous, I disagree. "Blowin' in the Wind" resonates deeply more than four decades later with a simple, direct question that continues to define the struggle for equal rights: "How many years can some people exist before they're allowed to be free?"

2. The Times They Are A-Changin' (1963) - While Dylan always rebelled against being labeled a protest singer or the voice of his generation, in songs like "The Times They Are A-Changin," I think he perfectly captured that generational divide. "Come mothers and fathers throughout the land, don't criticize what you can't understand. Your sons and your daughters are beyond your command. Your old road is rapidly agin'."

3. Like a Rolling Stone (1965) - I think "Like a Rolling Stone" is a great example of Dylan's skill as a storyteller. I also think that the sense of alienation in the lyrics, the sense of being a little adrift and uncertain of your place in the world, must have struck a chord with people in the mid 1960s: "How does it feel to be on your own with no direction home, a complete unknown. Like a rolling stone?" Haven't we all felt like that at one time or another?

4. Mr. Tambourine Man (1964) - Sometimes the lyrics in Dylan's songs can be a bit cryptic, but I think this is one of his most beautiful, with some of his most evocative and unusual imagery: "Then take me disappearin' through the smoke rings of my mind. Down the foggy ruins of time, far past the frozen leaves. The haunted, frightened trees, out to the windy beach. Far from the twisted reach of crazy sorrow."

5. Chimes of Freedom (1964) - My favorite version isn't Dylan's, but Bruce Springsteen's cover of it. Springsteen performed it in 1988, and it was released to benefit a tour in support of Amnesty International. I love the mixture of poetry and protest in the lyrics: Tolling for the rebel, tolling for the rake. Tolling for the luckless, the abandoned an' forsaked. Tolling for the outcast, burnin' constantly at stake. An' we gazed upon the chimes of freedom flashing."

Ok, you're probably sensing a theme here. All of my favorites were written in the early to mid-1960s. What can I say? I've always been interested in the history, politics and culture of the sixties. As much as Dylan fought against it, his music really did help to define that decade. In many ways, I guess they're the obvious picks. They're probably Dylan's most well-known songs. I know he wrote plenty of great music after 1965, but these are the ones that I love listening to the most. It's my folkie side coming out, I guess.

I've only seen Dylan perform once, on Aug. 31, 1988, at The New York State Fair, in Syracuse. (Wow, 20 years ago this month. I didn't realize it had been that long!) As usual, he didn't say much between songs. But it was a great concert and he played a couple of my all-time favorite tunes. Here's the track list:

Subterranean Homesick Blues, I'll Remember You, Tangled Up In Blue, All Along The Watchtower, Every Grain Of Sand, Highway 61 Revisited, To Ramona, Girl From The North Country, Don't Think Twice, One Too Many Mornings, I Shall Be Released, Silvio, Like A Rolling Stone, Times They Are A-Changin', Barbara Allen, and Maggie's Farm.

In a great bit of coincidence, a week after that anniversary I'll be making my first visit to Minneapolis, where a teenage Robert Zimmerman came from the North Country city of Hibbing to attend the University of Minnesota, where he got involved in the folk music scene, and where he became Bob Dylan.
Posted by Esther at 12:02 AM

Mine is "Don't Think Twice, It's All Right":

I ain't sayin' you treated me unkind
You could have done better but I don't mind
You just kinda wasted my precious time
But don't think twice, it's all right

I love his song "Hurricane" about Hurricane Carter.

Most of Time Out Of Mind ain't bad either . . . and a lot of Modern Times is fantastic. I Want You and Stuck Inside of Mobile With the Memphis Blues Again are also favorites of mine.

Thanks! I've listened to all of those songs, although some of them not in quite awhile. I should go back and put together a list of my more recent Dylan favorites, like from the '70s, '80s and '90s!

I still think that "Blowin in the Wind" is the Dylan song that people will still be listening to and singing 50 years from now.

It's not as lyrically complex as some of his later efforts, but there's something appealing about the simplicity and directness of it. It's a song that adults and children can enjoy. It captured the tenor of its time perfectly, and yet its message is compelling and timeless.