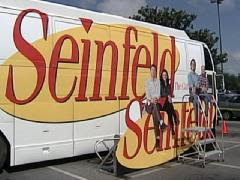 I'm a big Seinfeld fan. I just finished watching all nine seasons on DVD, and on my last trip to New York, I made a pilgrimage to Morningside Heights to see Tom's Restaurant, the exterior of which was featured in the series.

So I really hope this makes a stop near me.

A 60-foot-long bus filled with memorabilia from Seinfeld is embarking on a tour of 26 college campuses to try and drum up a younger audience for the now-syndicated show. It's starting off in Central Florida but I don't know any of the specific stops.

"Seinfeld has been America’s favorite shows for some 20 years. We are trying to take on more fans, younger fans," says Bob Oswaks of Sony Pictures Television.

Among the items you can see on the bus, according to this story, are Jerry's puffy shirt, the "manzier," a bra for men; a 1993 Emmy for best comedy series; and a doll that looks like Jerry’s mother. (I thought the puffy shirt was in the Smithsonian, so maybe this is a replica. Or maybe there was more than one.)

You'll also be able to watch your favorite episodes, eat candy featured on the show, sit in a replica of Monk's Diner and play a DVD-based Seinfeld trivia game that's being released this fall by Mattel.