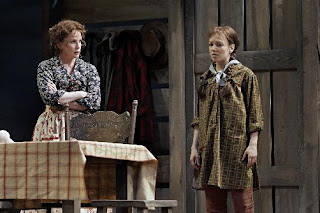 The musical Little House on the Prairie opened last night at the Guthrie Theater in Minneapolis and unfortunately, the two reviews I could find range from scathing to lukewarm. You can pretty much sum it up this way: mostly praise for the cast, mostly criticism for the music and story.

In the St. Paul Pioneer Press, Dominic P. Papatola finds fault with just about every aspect of the show, from the score by Rachel Portman and Donna Di Novelli, to Tony winner Rachel Sheinkin's book, to the staging by director Francesca Zambello, to Melissa Gilbert's performance in the role of Caroline Ingalls.

"Though it's earnest as all get-out and though the overwhelming majority of the cast is more than up to the task of putting on a top-notch musical, the problems with this show are deep, structural and systemic." Papatola writes.

He's particularly critical of Portman's music. "Far too many of her compositions are song-like collations that are half-formed collections of musical phrases that don't build musically or thematically. Most feel like they're all introduction, cut off before they could develop into a melody. They're often shoehorned into the show as energy boosters or placeholders, rather than as plot-advancers."

Papatola calls Sheinkin's book "a scatter-brained collection of two-dimensional types," and says that Gilbert, obviously brought in for her marquee value, is "without question and by far the weakest link in the casting chain." She sounds "like someone trying to read foreign-language cue cards phonetically."

He does manage a few words of praise for the rest of the cast."Kara Lindsay, the just-out-of-college kid playing Laura, has an endearing spunkiness, plays Laura's various ages well and believably, and has a powerful-but-supple singing voice." And Kevin Massey, as Almanzo Wilder, Laura's love interest, "has a nicely awkward, aw-shucks charm."

In the Minneapolis Star-Tribune, Graydon Royce is a bit kinder to the musical - calling it "a quaint throwback of instant nostalgia" and "an exuberant shout-out for rugged individualism all wrapped in a sanitized pageant of good-hearted Americana." Although he has some of the same criticisms of the book and score.

The creative team, Royce says, has "tricked out their proclamation with familiar types: grinning settlers who sweep women off their feet with big hugs; buggy races and July 4th firecrackers followed by the town burgher's call to "Circle round for the square dance!" Yee ha!" The score "has the broad strokes of Copland with its fiddles and hoedowns, and tries to corral a nod to the West with rhythms driven by tom-toms. The melodies, however, are pure Disney."

Still, Royce praises Lindsay, and Jenn Gambatese, who plays her sister Mary, blinded by scarlet fever. He describes their song, "I'll Be Your Eyes," as "a gorgeous duet that hits on every level." While Gilbert's singing "is not first class, Royce says that she "acquits herself absolutely fine." And Steve Blanchard's "broad shoulders and solid jaw" make him "the perfect vehicle to express Charles Ingalls' pioneer quest."

Despite the criticism, I'm keeping an open mind. I'll be in the audience for Little House on the Prairie in just three weeks, during my first-ever trip to Minnesota, and nothing can squelch my excitement. I'll let you know whether the critics have been too harsh or right on the mark.