Not in front of the children

I'm not a rabid devotee of This American Life with Ira Glass, but I usually end up listening to at least part of it on Sunday while I'm driving around doing errands. (The radio is permanently tuned to NPR. I don't even know the call numbers of any other stations in my area).

There's always one segment that really grabs my attention, forcing me to sit my car, in the parking lot of whichever store I'm at, until it's over. Today, I heard the show's 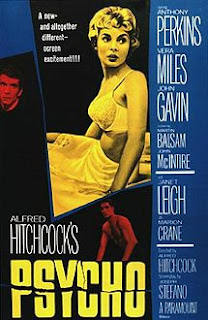 production manager, Seth Lind, talk about seeing an inappropriate movie as a child. When he was 6 years old, he watched The Shining and had nightmares and trouble falling asleep for two years afterward. (Lind is also a member of the improv group Thank You, Robot.)

The segment got me thinking about my age-inappropriate movie - Psycho. As a horror movie, it would probably be considered pretty tame today - I mean, it's not even in color - but it was scary enough for me. Actually, for me, it would be inappropriate at any age. As I mentioned in my review of the play The 39 Steps, I'm pretty squeamish.

I started watching Psycho on tv once when I was a little kid (or maybe not so little, I don't remember). I got as far as the shower scene. It made me so nauseous that I had to flee to the safety of my bedroom. I don't remember any nightmares or sleepless nights. But because of that experience, until fairly recently I pretty much swore off all Alfred Hitchcock movies. You can't be too careful.

I've never revisited Psycho and I'm certain I don't want to - ever. But I've mostly overcome my fear of Hitchcock and I've enjoyed many of his films over the past couple of years, including Vertigo, Rear Window, The Man Who Knew Too Much, The Trouble with Harry, North by Northwest and The 39 Steps, all without any ill effects.

Okay, I'm not big on heights, so I was a little nervous about Vertigo, but knock on wood, it went well. Of course, none of those is really scary. I've stayed away from The Birds, though. I have a feeling that one would be a little too intense and I don't want to press my luck.
Posted by Esther at 7:49 PM

We were just talking about "The Man Who Knew Too Much" at brunch today -- I love that movie. But definitely stay away from "The Birds" -- I hate birds, and that didn't help.

I saw bits and pieces of The Blob and The Birds when I was a kid. The former - I couldn't understand why it was supposed to be scary, just some ooze all over the place. The latter just flat out looked fake.

I'm not a horror movie person. I don't like modern horror movies one bit, they gross me out. I made the mistake of watching American Psycho when I was 21 and have regretted it ever since. But even so, those old movies, maybe because of the old-fashioned special effects, never affected me much when it came to fear.

Actually, the worst thing I ever saw as a kid was some old western (might have been a TV show even) where a town was raided and a family had all their photos dumped into a fire. They showed a closeup of one photo curling up in the flames, and I got violently ill. So yeah, apparently I react badly to slightly off things...

I can't do horror really either but I keep feeling I should watch some of these "classics" since I love film so much.

Thanks for the heads-up Kari. I don't hate birds, but I think I will stay away from "The Birds."

Hey Amanda,
What struck me about listening to that segment was, everyone has a movie that scared them as a child. I think it's a pretty universal experience. In fact, I forgot to mention that the flying monkeys in "The Wizard of Oz" also scared me. Even today, I find them more than a little creepy! And I can definitely see where a burning family photo would make you feel ill.

You know, ever since getting Netflix, I have experimented with different genres, like Hitchcock, French New Wave, Italian Neo Realism. I've made my way through "The Sopranos" and "Sex and the City" and "Arrested Development." But horror is one genre I think I'll stay away from!

Those flying monkeys WERE creepy!!!